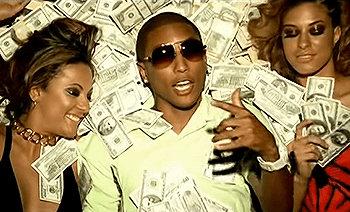 "You diss me out of pride
But when you're finished talking about money and bitches you're simply out of rhymes."
— Canibus, "Levitibus"
Advertisement:

Glam Rap isn't so much a genre as it is a label (usually pejoratively) that's thrown at most hip-hop in the Turn of the Millennium. The earliest form of hip-hop that showed shades of this was probably Eric B. & Rakim's Paid in Full album, followed by the works of Big Daddy Kane and eventually Cash Money Records. Jay-Z's "Big Pimpin" is the Trope Codifier. Glam Rap is arguably a good way for a rapper to be mainstream without losing "street cred". Sure, they talk about the streets, but not necessarily in the same way as in other, more controversial rap genres.

Their content is more or less the hip-hop equivalent of the Lifestyles of the Rich and Famous, and definitely lighter in tone and more radio-friendly. Expect the music videos to feature the following motifs: sprawling mansions; long, luxury yachts; exotic, six-figure sports cars and luxury cars; pimped out cars with big DUB rims (which may or may not be spinning) and/or lowrider hydraulics; tons of stripperific models gyrating by the large infinity pool with glasses full of champagne; and lots of big, gaudy jewelry.

The sub-genre gets a lot of heat because it's usually the only type of rap that seems to get played on the radio or covered in magazines, leaving people to believe that rap has gotten too commercial, and that acts tend to be less topical and reliant on novel lyrical flow. In this sense, it can be seen as rap's analogue to the unapologetically commercial and hedonistic Hair Metal that dominated the metal scene (and rock music in general) in The '80s, and the antithesis to the old-school hip-hop that came out of that era. The names are even similar — one of the most common alternative names for hair metal (and which happens to be the one in use at The Other Wiki) is "glam metal". There is some overlap with Gangsta Rap, as many of these artists have a dark side. One doesn't always indicate the other, however.