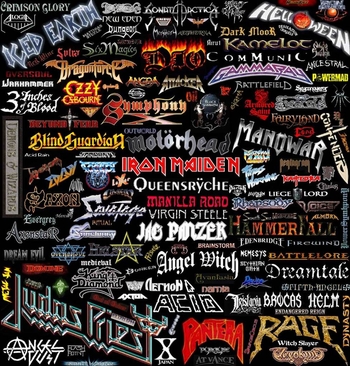 Famous for Heavy Metal Umlauts, Metal Screams, and metalheads having huge online arguments about which bands are and aren't metal, or music in general. The look varies by era, but long hair, leather, jeans, studded belts and boots are widely part of the metal look.

Not to be confused with Metallic Tropes (although this genre was named after the term for metallic elements with high proton counts).

Extreme Metal redirects here. The definition of this genre is hazy and controversial, but it's generally considered to be an umbrella term collecting Thrash Metal, Death Metal, Black Metal, and any of their derivatives. Doom Metal is occasionally included in this, but sometimes only the heavier variants of that genre such as Sludge Metal and Death/Doom.

No relation to the song by Justice, which is not a heavy metal song.

For an in-depth look, see Useful Notes on Heavy Metal and the Mäp of Metal