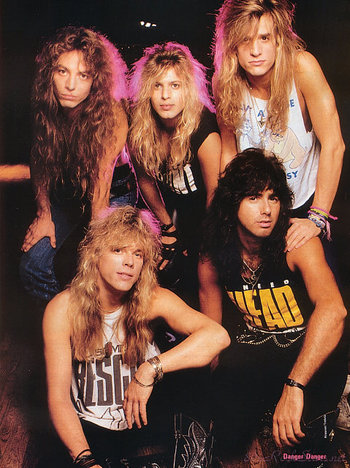 Danger Danger is an American Hair Metal band based in Queens, New York, one of the very last of their genre to break through. The band was formed in 1987 by vocalist Mike Pont, bassist Bruno Ravel, keyboardist Kasey Smith, and drummer Steve West, though Pont later left and was replaced by Ted Poley. Around this time guitarist Andy Timmons was also added to the band. Their first album was simply known as Danger Danger and produced hits "Bang Bang" and "Naughty Naughty" (and no, not all of their songs are repeated words like the band's name).

The album Cockroach went through some legal issues; it was was recorded in 1993, after which Ted Poley was fired. Naturally, Poley was not happy, so he ended up suing. The album eventually did get released in 2001 with two discs, one with vocals by Poley and one recorded by replacement vocalist Paul Laine.

In 2004, Laine left and Poley returned, with the album Revolve being his first Danger Danger Album since Cockroach.

Poley is perhaps best known these says as the singer on for "Escape from the City" from the Sonic Adventure 2 soundtrack (which he recorded with Tony Harnell) and various remixes thereof, as well as other songs in the Sonic the Hedgehog series.

Compare to Hardline, a similar sounding band that came out during the tail end of the Glam scene and also had a member providing music for Sonic.