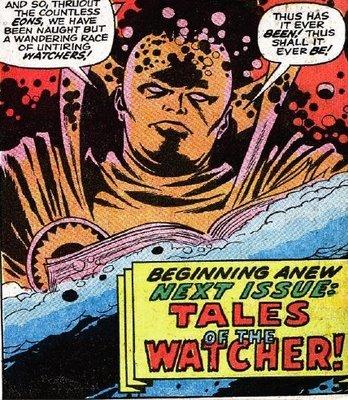 "Every step you take, I'll be watching you."
Guardian of Metal: Me? Oh, I'm nobody. I'm just The Guardian of Metal!
Eddie Riggs: Oh, cool! So, you wanna help me fight demons and stuff?
Guardian of Metal: Nah, I'm not really a fighter. I'm more of a... keeper of timeless secrets.
— Brütal Legend
Advertisement:

Our heroes might be good at what they do, but this person is on another level altogether. For some reason, this makes them useless.

An All-Powerful Bystander is a being who is so powerful that it seems likely they could just solve the entire plot with a snap of the fingers. They are, effectively, God, but they're not going to fix the problems facing the universe. Why? There are a variety of reasons:

Sometimes a Sufficiently Advanced Alien, but most of the time, they're presented as something beyond the "simple" notion of an alien being.

Usually, they just show up to give the hero a mission and some cryptic advice. Often overlaps with the Spirit Advisor.

There are both good and evil Bystanders. The evil sort usually give you superpowers in exchange for your allegiance. The good sort do this less often, mostly just giving you a new +2 sword when you've proven yourself sufficiently.

Sometimes, on very rare occasions, when you are really totally boned, you might be able to persuade, convince, or shame them into bailing you out. However, this usually comes at some tremendous price, and "the consequences are dire". Often, so dire that you end up wishing you'd solved your problems yourself.

Sometimes, the Bystander is also a Trickster Mentor. Their advice is no less cryptic, but is at least more interesting.

While some Bystanders appear in a form mortals can comprehend, others simply don't care.

For more information about their Power See The Omnipotent.

The Great Gazoo is similar in power but more active. In videogames, they may be the Exposition Fairy. The Interactive Narrator is a No Fourth Wall version. See also: Deism and The Gods Must Be Lazy. Not to be confused with Badass Bystander.

The Elder Gods refuse to get involved despite the obvious danger it proposes which Raiden calls them out on.

The Elder Gods refuse to get involved despite the obvious danger it proposes which Raiden calls them out on.