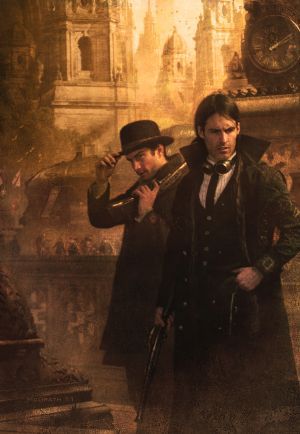 "When I found my way out to the Roughs, when I started bringing in the warranted, I started to... Well, I thought I'd found a place where I was needed. I thought I'd found a way to do something that nobody else would do. And yet, it appears that all along, the place I left behind might have needed me even more. I'd never noticed."
— Waxillium "Wax" Ladrian
Advertisement:

Wax and Wayne is a Sequel Series to the first of the Mistborn trilogies by Brandon Sanderson, set roughly 300 years after the events of Hero of Ages. It features Waxillium Ladrian, a noble that became a lawman in The Wild West-esque Roughs returning to his home in the city of Elendel to try and settle down. His attempts at the quiet life are quickly foiled, however, by the return of his old friend Wayne, his own internal desire to do the right thing, and the appearance of a mysterious group of thieves called "The Vanishers". Now, Wax, Wayne and newcomer Marasi Colms must team up to solve crimes and save the city. However, the Vanishers are only just the beginning of a much deeper conspiracy...

Originally conceived while Sanderson was taking a break from working on the last volumes of The Wheel of Time as a writing exercise, the story quickly grew beyond its planned scope, and was deemed suitable for publishing as a fully-fledged novel. Brandon Sanderson plans to write four books in this series before the release of the second Mistborn trilogy (planned to be set in a 1980s-analogous period with a female Nicroburst computer-programmer protagonist). There are currently 3 officially named books:

See also Elantris, Warbreaker and The Stormlight Archive for more books by Brandon Sanderson taking place in The 'Verse known as The Cosmere.