This page is for characters from Brandon Sanderson's first Sequel Series to the original Mistborn trilogy, Wax and Wayne. See here for characters in the prior series. 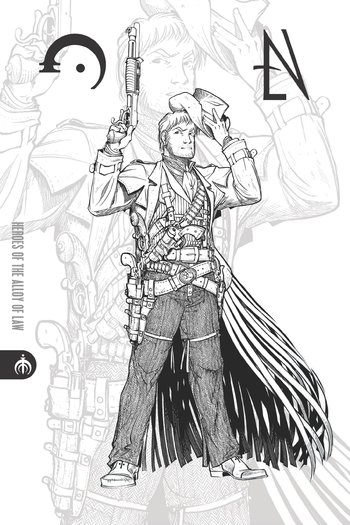 The main character of the book. Wax was formally a lawkeeper in the Roughs, but after he accidentally killed his wife, he returned to the city. Due to his uncle's untimely death, he becomes the head of the Ladrian House. However, due to the crime wave in Elendel, he takes up his guns and prepares to fight crime once again. 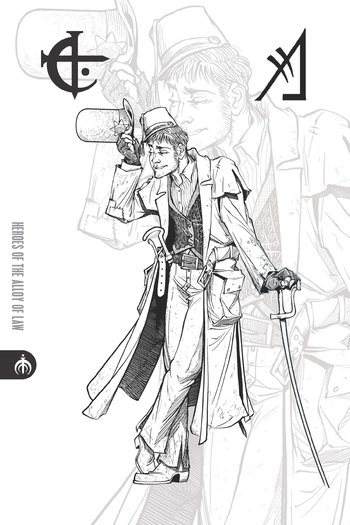 Waxillium's partner in crime... fighting. After Wax heads to the city to take over House Ladrian, Wayne follows him there. Once he arrives, he continues to provide Wax with staunch support. 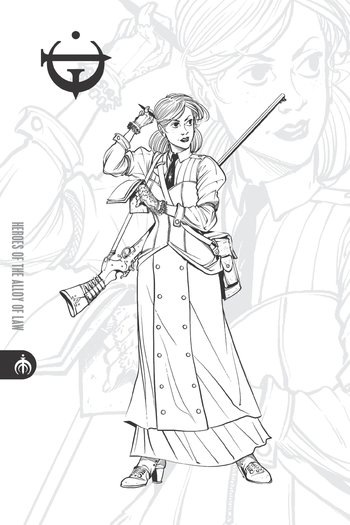 The cousin of Steris Harms, Marasi teams up with Wax when he saves her from a kidnapping attempt by the Vanishers. Her knowledge of criminals is a great help in figuring out the plans of their foes. Originally a university student studying to become a lawyer, after the Vanishers case she changes tracks and becomes a police officer in Elendel's constabulary.

Wax's fiancé, a minor noblewoman whose marriage to Wax is intended to improve the social and economic standings of their respective houses. Kidnapped by the Vanishers early on, causing Wax, Wayne, and Marasi to set out to rescue her.

The kandra who gave Wax his Pathian earring when he first moved to the Roughs. A major character in the second and third books. She had previously played a minor role in the original Mistborn novels.

A member of the airship from the southern half of the planet that the Set captured. He is one of the few survivors of their "questioning."

A gunsmith ally of Wax's who hates Wayne. Also a lurcher.

Wax's sister; she goes missing in the first book thanks to the machinations of Mister Suit and serves as his motivation to hunt down the Set, and appears in person in The Bands of Mourning.

The father of Steris and Marasi (with different women), who works to arrange a marriage between Steris and Wax.

An Elendel constable who heads up the octant where most of the first book's action takes place.

Head of the Fourth Octant constables. He originally retired when he hit the glass ceiling caused by his non-noble bloodline, but was re-hired and promoted after Brettin retired. He is Marasi's direct superior.

Daughter of Remmington Tarcsel, an inventor who had his ideas stolen by Professor Hanalaze. She is at least as smart as her father and is fighting to continue his work and get him recognition for his achievements, after his death.

A moronic, shortsighted yet well-intentioned Gentleman Adventurer who frequently appears in the various newspapers included in the books, and the Allomancer Jak short story in Arcanum Unbounded.

The villain of the prologue. A former mortician who turned to gruesome murders to create displays of "art" out in the Roughs. He was the last outlaw Wax brought in before returning to Elendel. 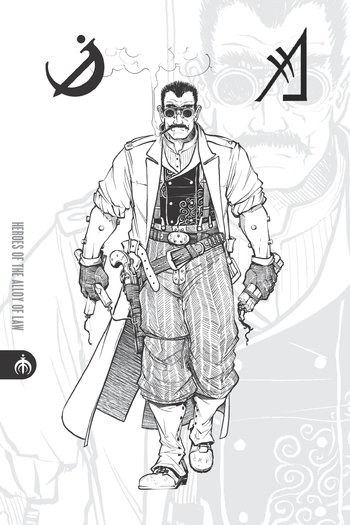 The leader of the Vanishers, he hates nobles and everything they stand for.

A koloss-blooded pewterarm who is one of the top enforcers of the gang.

Two bodyguards on loan to the Masked Man from Mr. Suit.

The man who helped finance the Vanishers, he is somewhat put off by the Masked Man's theatrics, but goes along regardless.

The Big Bad of The Bands of Mourning, this high-ranking member of the Set is Mister Suit's superior. She is involved in a number of experiments involving hemalurgy and is also attempting to steal and/or reverse-engineer Southern technology.

Mentioned by Mr. Suit, implied to be the larger conspiracy behind the Vanishers.

Death himself. Named for the iron spikes still smashed into his eyes.

Kelsier, or someone imitating him extremely well, appears to have survived his apparent death in the original trilogy. See also Kelsier

Shapeshifting hemalurgic creations of the Lord Ruler who require bones as a foundation to hold any reasonable shape. They serve Harmony now as his "Faceless Immortals."

A kandra who appears at the end of book one impersonating a constable (only confirmed per Word of God) and is a major character in the second book.

The Big Bad of the second book, an insane kandra who removed one of her Hemalurgic spikes so that Harmony couldn't control her.