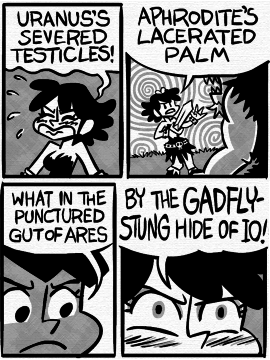 "By Me!"
— Jupiter, The Twelve Tasks of Asterix
Advertisement:

Even though many churches really don't want us to use the Lord's name in vain, many people, especially in fiction, will end up saying "Goddammit" or "Oh my God" for one reason or another.note Technically, "God" isn't His name; even the words it's translated from ("El", "Eloah", and "Elohim") are more like describing what He is rather than a name. And the commandment in The Bible was originally about making false oaths anyway. However, a writer can't invoke a god in a fantasy environment because monotheism is rare, so where we say "Oh My God", characters in the fantasy universe will say "Oh My Gods!"

Depending on how developed the world is, it is also quite common to invoke actual gods by name, such as the Gauls in Asterix saying "By Toutatis!" (well, he was an actual Gaulish god). Another common variation used by future civilizations is to invoke science or scientists instead. Occasionally an Alternate History with a non-monotheistic major religion will use this to demonstrate how different that world is. Sometimes a Physical God will reference themselves in this manner, with "By me!", "I swear by Myself!","Jesus H. Me!" or similar.

Basically Truth in Television: although "Oh My Gods" isn't realistic, just plain "Gods!" does occur in Greek and Roman literature as an exclamation, although admittedly the emphasis is a little different (the speaker will usually address the gods with an appeal for help or an incredulous "Do you see this?"), and phrases like "ye gods" (and its minced-oath version "egad") or "by the gods" are equally common (a variation is "by Helios" since the sun sees everything and is the god of oaths; interestingly the Franks also swore by the sun). (Also common was the singular "God", which might mean either the chief god of the pantheon or whatever god the speaker happened to be particularly devoted to.) Even more vulgar constructions have been found as well; a popular epithet found carved into walls by Roman hooligans is "By Juno's twat!" It's not uncommon in modern times, either, depending on what circles you travel in.

The inverse is Orphaned Etymology, which writers may consider avoiding. If, in the created world, there is nobody referred to as "God", and if there isn't at least a belief in an afterlife/underworld called Hell, then nobody should use expressions that invoke either — although a charitable audience could always put this down to Translation Convention.

Compare Answers to the Name of God, when someone swears "My God!" (or the equivalent), only for another character to reply "Yes?"

See also: Unusual Euphemism, Curse of The Ancients, Hold Your Hippogriffs, Pardon My Klingon. For non-human examples and belief systems, see Thank the Maker. This page is not for the Indian movie Oh My God!