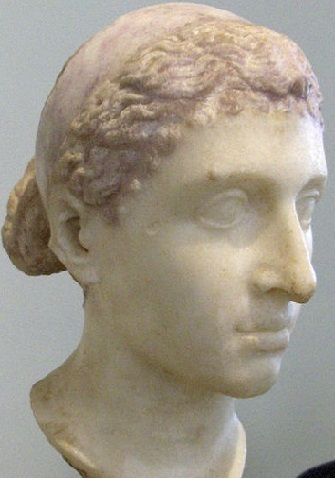 The face of the historical ruler, complete with her famous nose.
The great Lady of perfection, excellent in counsel
— Translation of her Horus Namenote Ptolemaics borrowed the custom of Egyptian Pharaohs to have heraldic names. Cleopatra's name, transliterated from her hieroglyphics is Weret nebet, neferu akhet seh
Advertisement:

A.k.a. the Cleopatra most people think of. Yes, there were six of them before her.note Probably. There may only have been five - Cleopatra V and VI might have been the same person, as the evidence is contradictory, and the Ptolemaic Dynasty gives new meaning to the phrase "Tangled Family Tree."

Cleopatra VII Thea Philopatornote 'Cleopatra' meaning 'glory of her father,' 'Thea Philopator' meaning 'Goddess Who Loves Her Father' (69 - August 12, 30 BC) was the last Pharaoh of Ancient Egypt, at different points ruling jointly with her father, brother, other brother, and son, though with the latter three, she was clearly in charge and only using them to bolster her credibility as a female ruler. The Ptolemaic dynasty Cleopatra descended from was actually Greek; after the death of Alexander the Great, his empire was divided up by three generals, and Ptolemy I Soter got Egypt. Cleopatra was actually the first of her dynasty to bother learning Egyptian, and presented herself to her kingdom as a reincarnation of the goddess Isis.

The identity of Cleopatra's mother is uncertain. Born the third child of Pharaoh Ptolemy XII Auletes, Auletes lost his grip on his kingdom due to corruption and the loss of Cyprus and Cyrenaica. In a desperate bid to regain control, he fled and begged Rome for money and troops to help him regain his throne. Cleopatra's two older sisters, Cleopatra VI Tryphaena and Berenice IV, seized power at this time — first Cleopatra VI, then Berenice upon her mysterious death. Whether or not Cleopatra VII accompanied her father to Rome or remained in Egypt is debatable; she isn't really a concern in the contemporary records of either place. The reason this is even a question is because some accounts describe her as meeting Mark Antony around this age, while others assert she met him as an adult. What is certain is that Auletes eventually was able to secure the troops and money, and that Berenice was imprisoned and executed for her disloyalty. Cleopatra was now fourteen, the eldest of her remaining siblings, and thus the one with the best chance of keeping a hold on the throne should their father die. He elevated her to joint ruler at this point, though it's unlikely she had much power.

In his will, four years later, he decreed that 18-year-old Cleopatra would rule jointly with her ten-year-old brother, Ptolemy XIII. She married him according to Egyptian custom, which the Ptolemies adopted to imitate the Pharaohs and also keep themselves, and other Hellenic settlers separate from the common people. Cleopatra however disliked her brother and eventually, she progressed to leaving his name off official documents and his face off the coinage. This was just another complication on top of widespread famine and the Nile not flooding enough to irrigate crops. Around this time, Cleopatra ran foul of the Gabiniani, troops left behind when her father was restored to power. When they killed the sons of the Roman governor of Syria, she handed them over in chains, and they didn't forget that. She was exiled when they joined with a cabal of courtiers and had Ptolemy placed on the throne as sole ruler.

The teenage Ptolemy and his advisers made a grave mistake, however, when they executed the fleeing Roman consul Pompey, hoping to curry favor with Pompey's rival triumvir (and former father-in-law) Julius Caesar. Upon hearing of the death, Caesar declared his horror at the death of a Roman citizen at the orders of a client barbarian-king, promptly took control of Egypt and declared himself the arbiter of Ptolemy and Cleopatra, citing the will of their father which made Egypt a client of the Republic. Cleopatra, as per Plutarch, had herself smuggled to Caesar inside a rolled-up carpet. They had an affair, with Cleopatra giving birth to his son, Caesarion, or "Little Caesar". The end result was that Caesar decided not to annex Egypt, and settled that Cleopatra and her brother were to be reconciled. Cleopatra would have preferred for Caesar to name their son his heir (which was illegal under Roman law, as Caesarion was not a Roman citizen) and to rule jointly with him after Caesar left, but Caesar refused.

This led to a civil war in Alexandria, and, possibly, the burning of the famous Alexandria library. Caesar eventually got things under control, but Ptolemy drowned when his armor weighed him down too much. Cleopatra was promptly married to their younger brother, and he became her co-ruler. Her younger sister, Arsinoe, was taken to Rome by Caesar, kept as a hostage, and executed years later by Mark Antony, on Cleopatra's orders. After the assassination of Caesar, Cleopatra insinuated herself into the newly formed government among Caesar's three heirs: de jure successor Octavius, and Caesar's top generals Mark Antony and Marcus Lepidus. Antony was given reign over the extremely wealthy eastern provinces (such as Egypt) and Cleo ensured her place in the new government by becoming Antony's lover and mother of three of his children (which was a shock to Antony's second wife Octavia, who was also Octavian's sister).

Octavian's xenophobic propaganda campaign sought to de-legitimize his final rival standing in his path to absolute power. His campaign insisted that Mark Antony was becoming a puppet to the "foreign queen of Egypt" and he deliberately emphasized the scandalous nature of the union between Antony and Cleopatra, and painted his rival as a puppet to Cleopatra. The official declaration of war was against Cleopatra, not Antony for this reason. It was intended to dial down the spectre of Roman-on-Roman violence of the Late-Republican Civil War which had seen many purges, and deaths of prominent Roman citizens, polarizing the citizenry and the political class. Emphasizing Cleopatra's otherness served to make Mark Antony, a prominent Roman citizen and Octavian's senior in political and military honors, an outsider to Rome, and violence visited on Antony and his soldiers, was as such not really a civil war, but a war against a foreign power. Recent historians, such as Adrian Goldsworthy, as such qualify the Roman Pretext for War which needed to make Cleopatra more prominent, influential, and powerful than she was. While the Romans tended to paint Cleopatra as a schemer with Antony as her puppet, the reality was likely the reverse.

Mark Antony had a huge army in the time, of which Cleopatra's forces were merely a part, and by no means the largest. That would be King Artavasdes of Armenia, who provided six thousand horse and seven thousand foot. Antony's land army actually outnumbered those of Octavian's, and indeed Plutarch writes that when the Romans declared war on Cleopatra, and Octavian started raising taxes on his people and provinces, Antony (and Cleopatra) had a chance to win had he struck for Rome while Octavian was still shaping his army. Instead he dragged his feet wasting crucial time, and most tragically, he resolved to meet his enemy by sea, where Octavian had invested heavily in the navy. Cleopatra and Antony's combined forces were no match for Octavian, and after losing the Battle of Actium, the two of them escaped back to Alexandria. The couple, and the city of Alexandria, fell into a much storied Despair Event Horizon since they fully knew that they lost, and that Egypt would be annexed by Rome. Cleopatra VII spent her final days, building and overseeing tombs and monuments, and famously took residence with her servants in one of them which was famously accessible by scaffolding at a high window, since the building had no doors.

After Mark Antony committed suicide, albeit botched, so that he died slowly and was brought to his beloved's monument where she saw his final moments, Cleopatra was visited by Octavian. The latter wanted to take her back to Rome as part of his Roman triumph (which would have likely involved her being killed in public in said ceremony, similar to how Vercingetorix of Gaul was killed in Caesar's triumph). He also appointed guards and other watchers to make sure she did not commit suicide. Yet inevitably, somehow, Cleopatra did die, according to legend, by means of an snake hidden in a basket of figs brought to her. Octavian, now named Augustus, had to be content with a tablet in the triumph showing her death. He also honored her final requests and buried her next to Mark Antony and while he killed Caesarion, Cleopatra's child with Caesar, he did adopt and raise her children with Mark Antony. Likewise, the first Roman Emperor, was much inspired by the splendor of Alexandria and when embarking on his famous rebuilding of Rome borrowed much inspiration in civil engineering from Cleopatra's regime, so that Rome could outshine it in splendor.

Cleopatra was the last of the Ptolemaics, and the last of the Diadochi, i.e. the Hellenic Kingdoms formed in the wake of Alexander the Great's conquests and the Macedonian Succession Wars which followed.