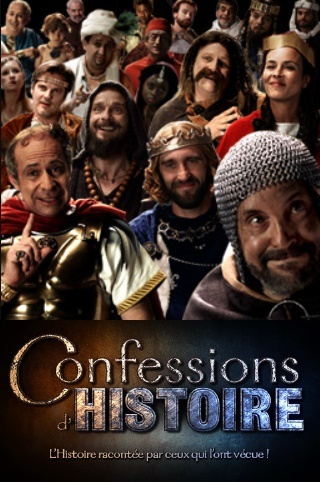 Confessions d'Histoire (literally translated as Confessions of History) is a French YouTube-based Edutainment Show created and written by Ugo Bimar.

As the name implies, it consists in parodic Confession Cams with historical characters detailing their life and/or the historical events they went through as if they were in a Reality TV show. Expect plenty of Black Comedy.

Six episodes have been released since the channel started:

Julius Caesar and Vercingetorix each tell their version of the Gallic Wars (58-50 BC).

From Alexandria to Actium

The transition from The Roman Republic to The Roman Empire and the end of the Ptolemaic kingdom of Egypt told by Julius Caesar, Cleopatra VII, Marcus Antonius (Mark Antony) and Gaius Octavius (48-30 BC).

Richard the Lionheart and the Third Crusade

The Beauty Tutorial of Agnès Sorel

Beauty tips by Agnès Sorel, the mistress of King Charles VII of France from 1442 to 1450.