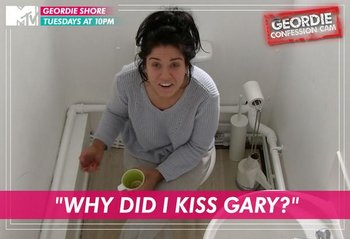 In Reality Shows, a camera which is set up in an isolated location (a small room or, in outdoor environs, a secluded area), where the show's participants appear individually to speak candidly about tactics, motivations, the other players, etc. A common feature of the Reality TV Show Mansion. In many cases, Confession Cam interviews are produced in such a way that they can be spliced into the regular footage at any point with Manipulative Editing, and may be used several episodes away from when they actually took place. A few clever participants (most of them female) have circumvented this by noticeably changing their hairstyles and/or make-up each day, very effectively limiting how much the footage can be misplaced.note Later shows have gotten around this by requiring contestants to maintain the same outfit and appearance for confessionals.

The modern concept, similar in execution to documentary interviews, hearkens back to the granddaddy of the reality show, MTV's The Real World along with its younger sister series Road Rules. Episodes were spliced with clips of the castmates talking directly to the camera, sharing their thoughts on the other castmates and whatever drama was at hand. Initially, it was made to look like the speaker was alone in a room with the camera. However, there was always an unseen producer behind the camera asking questions, and they'd splice together the best soundbites for the episode. Nowadays, it's usually much more clear that the speaker is talking to someone offscreen, and you might even hear the producer respond during particularly emotional or unusual moments.

Speaking to the Confession Cam can be quite hazardous to the speaker's personal reputation — it's important to not only watch what you're saying, but also how you say it, so that it's harder to twist around via clever editing. The above-mentioned hair-change trick is one method; another is to pay careful attention to what you're saying and deliberately 'bust the take' so that you can mentally compose a better response.

Not to be confused with the confessional at your local Catholic church. If you do mix them up, prepare to be Convicted by Public Opinion sooner or later. Compare Engineered Public Confession and Accidental Public Confession for when the speaker isn't aware he or she is being overheard.

The main contestants are all interspersed with a Confession Cam segment, as commonly seen on reality cooking shows such as "Master Chef". But the scenes are later revealed to just be Mortimer listening to the contestants talking inside a pretend TV.

The main contestants are all interspersed with a Confession Cam segment, as commonly seen on reality cooking shows such as "Master Chef". But the scenes are later revealed to just be Mortimer listening to the contestants talking inside a pretend TV.