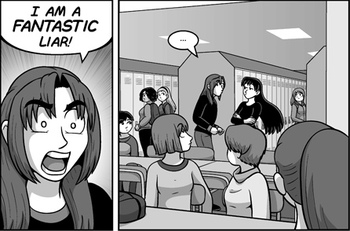 "Jimena, Patricia, Patricia, Jimena, what does it matter? You know what? I would have killed to see your face at the exact moment when you heard that Patricia Longo was Jimena Benitez!"
— Guillermo, Graduados

Not necessarily confined to a villain confessing a crime, sometimes it's just information someone had wanted to keep secret or information that someone wasn't ready to share yet.

Type 1: The villain has the goody-goody face on, but someone has provoked him into a moment of rage, at which point the anger does the talking and, in a Moment of Weakness, the confession of the dastardly deeds spills out along with all the vitriol. Different from an Engineered Public Confession because the villain's mental state has rendered him/her temporarily unaware/uncaring that there's an audience. The audience may or may not have any idea there's going to be a confession.

Type 2: The most unfortunate kind of Accidental Public Confession comes from someone blithely blurting out something they thought the other party already knows.

Type 3: "Is This Thing Still On?" Somebody doesn't realize there's a live microphone to pick up their confession. See also some examples in Did I Just Say That Out Loud?

See also You Just Told Me for when the confessor is tricked into believing the other person already knows, and Engineered Public Confession for when the hero secretly arranges and records/broadcasts the confession. May overlap with Easily Overheard Conversation. I'll Never Tell You What I'm Telling You! is a variation of this. Compare to Poorly Timed Confession.

Blurting it out in a moment of weakness:

Thinks the other party already knows:

Accidentally caught on a live microphone:

Lisa and Bart manage to trick Bob into confessing his voter fraud, by playing to his ego and claiming he was a mere lackey. It works and he quickly produces evidence of his fraud.

Lisa and Bart manage to trick Bob into confessing his voter fraud, by playing to his ego and claiming he was a mere lackey. It works and he quickly produces evidence of his fraud.