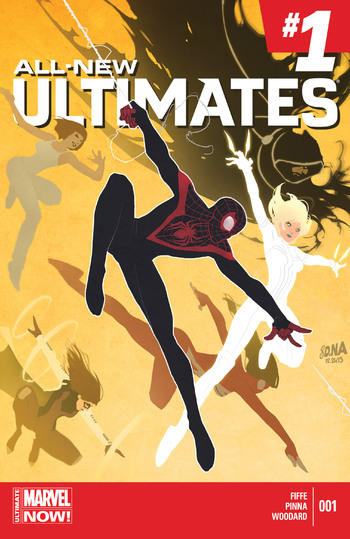 "I say we keep it simple and just take All-New Ultimates."
— Cloak
Advertisement:

The All-New Ultimates were a superhero team, created by Michel Fiffe in 2014. It was set in the Ultimate Marvel universe. The Ultimates break up after Cataclysm: The Ultimates' Last Stand, as Captain America had died and Thor got lost in the Negative zone. The team is composed by:

Jessica Drew, a.k.a. Spider-Woman, noticed a ton of illegal genetic research activity going in Roxxon, so she decided to investigate them. However, she could not do it alone, having tried it before and gotten caught and nearly vivisected by the scientists. Also, she could not enlist the help of the Ultimates since SHIELD had contracts with them. So she decided to reach out to Miles Morales while he was still in mourning from his KIA mother. It took some time, but he eventually signed on. They go and investigate their first leads and results of Roxxon experimentation and come across a distressed Bombshell who was worried that her previous attackers, Cloak and Dagger were still after her. Both Jessica and Miles console her and try to piece her connection to Roxxon only to be attacked by Taskmaster who was hired by the evil corporation to take Bombshell out. During the battle, Cloak and Dagger help defeat the assassin after which all of them talk and notice their eerie connection to Roxxon. So they all decide to take Roxxon out in spite of overwhelming odds. They defeat the corporation and then decide to become a team afterwards. Far from the international conflicts of the original team, the All-New Ultimates worked against a Mob War. Crime in New York had been made worse after Cataclysm, as S.H.I.E.L.D. was closed in the aftermath. The team fought against Diamondback and Crossbones, the vigilante Scourge, and an anti-gang police unit.

Not to be confused with the 2010 "New Ultimates" miniseries, starred by the original team.