Waking Up at the Morgue 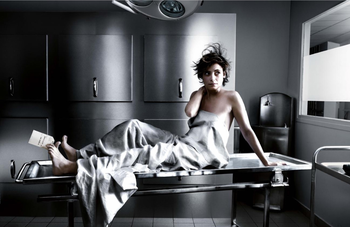 Not everyone rests in peace.
"Waking up on a slab in a morgue. The story of a character who's been processed and discarded by the bureaucratic machinery of the world…"
— Tasteful, Understated Nerdrage, "Cyberpunk is back"

If you have a character that has a Healing Factor or Resurrective Immortality, a great way for them to discover the power is for them to wake up at the morgue. Can also be done if the character is drugged or Faking the Dead. Either way it can be shocking, as the last place a person wants to be is at the morgue.

Naturally, there will be much confusion the first time it happens to someone, with or without amnesia and will usually have been completely undressed, and may have to make do without any clothing or equipment. Compare Rise from Your Grave and Waking Up Elsewhere. Can be a form of First Episode Resurrection.

Believe it or not, this is an example of Truth in Television. Rare today (though there is the occasional, erm, incident...), but more common in ages past when medical science wasn't all it is now. The only thing worse than waking up in the morgue, of course, was to be actually Buried Alive, which could also happen from time to time.note The Buried Alive part is virtually impossible today since the dead are usually either embalmed before burial, or cremated. Neither of which you could wake up from. Unless maybe you're a Phoenix. And better not think what would happen if you're slated for dissection, especially by a Creepy Mortician...