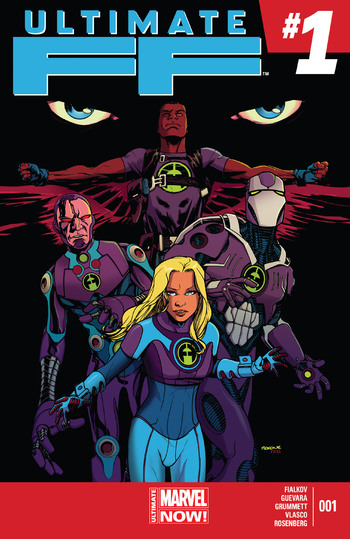 They are Four! It's Fantastic!
Ultimate FF (FF as in "Future Foundation", not Fantastic Four) was a 2014 comic book, set in the Ultimate Marvel universe.
Advertisement:

Earth had successfully survived the coming of Galactus in Cataclysm, but Captain America died and Thor got stranded in the Negative Zone along with Galactus, which caused The Ultimates to break up. Even more, SHIELD was closed as well. But there are still weird threats out there, including incursions from other universes, so former SHIELD agent Phil Coulson arranges a team with the most intelligent people around: Dr. Sue Storm (from Ultimate Fantastic Four), Tony Stark (from the Ultimates), Machine Man and Sam Wilson, as well as a 5º member that joins them at the end of the first issue.