Your Approval Fills Me with Shame 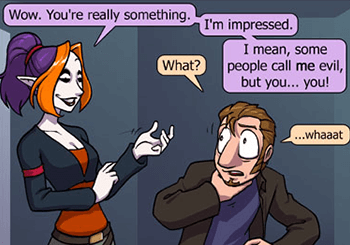 So our once-spotless character has just performed a bit of Dirty Business, or worse, in a moment of weakness, they've done something unambiguously wrong, perhaps even lowering themselves to the level of the villain. Either way, their character flaws have just been laid bare.

"Nice one", the evil villain says, "and I thought I was the bad guy, here." At this point, the hero realizes that they must have done something horrible to warrant a compliment from their most hated adversary. They may brush it off with a quick retort or explanation but the villain's words will linger regardless.

This generally comes in one of two flavors: in one, the villain is genuinely impressed by the unheroic deed and pays the hero an honest (if unwanted) compliment. This shows up more frequently in comedic works. In other, usually more dramatic cases, the villain's motive is to sarcastically mock the hero's claim to the moral high ground, mess with the hero's head, goad him into taking more actions he'll regret, or to make him realize that evil may just be his style.

Essentially an inversion of What the Hell, Hero?. Sometimes part of a Breaking Lecture or a "Not So Different" Remark. Can occasionally occur solely among heroes, with an especially dark Anti-Hero or Sociopathic Hero standing in for a villain; if the approval is expressed by a superior or a commanding officer, it's likely to be a Medal of Dishonor. Often the person receiving the unwanted approval will feel that they have been Damned By a Fool's Praise. When villains compliment one another, it's Arson, Murder, and Admiration. There's also its total opposite: the Insult Backfire, where the villain appreciates the qualities the hero accuses them of. Can occur with So Proud of You. Compare Compliment Backfire (where the problem is not what is being said (or who is saying it), but how); You Could Have Used Your Powers for Evil, where a villain notes the hero could have made a good villain; Anti-Advice, where the nature of the advisor causes the advisee to do exactly the opposite; At Least I Admit It, where a villain notes that, unlike the "hero", he's honest about doing wrong; and Dismissing a Compliment.