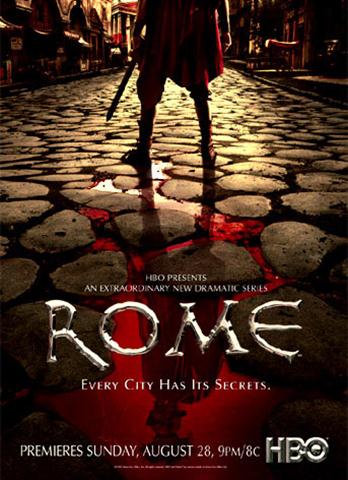 "I shall be a good politician. Even if it kills me. Or if it kills anyone else, for that matter."
— Mark Antony
Advertisement:

Rome (2005-2007) is a semi-historical drama series co-produced by HBO and the BBC. It follows the lives of Real Life politicians, socialites, and soldiers in Ancient Rome starting with Caesar's conquest of Gaul and progressing through the power struggles and ascension of Augustus as the first Roman emperor. It focuses on the adventures of two (semi-fictional)note Vorenus and Pullo are mentioned briefly in Caesar's writings, but nothing is known about them beyond that, making their characters almost entirely an invention of the show's creators soldiers, Centurion Lucius Vorenus and Legionary Titus Pullo, who witness, and sometimes influence, the major events of the era. Features one of the most notable Evil Matriarch characters in contemporary TV history, Atia of the Julii.

One of its most innovative ideas was to focus on the lives of ordinary fictional Romans, rather than just historical figures like Julius Caesar or Augustus. This had been explored before in literature and in sitcoms, but Rome was the first television drama to do so. It was a great concept. The show had a tremendous ensemble cast, incredible production values and was both epic in scope and paid meticulous, loving attention to detail. It ended after its second series due to insufficient ratings to justify its massive expense. HBO executives later regretted the decision as DVD sales turned out to be very good.

For the capital of Italy, see Rome.

Example of:
Antagonist in Mourning