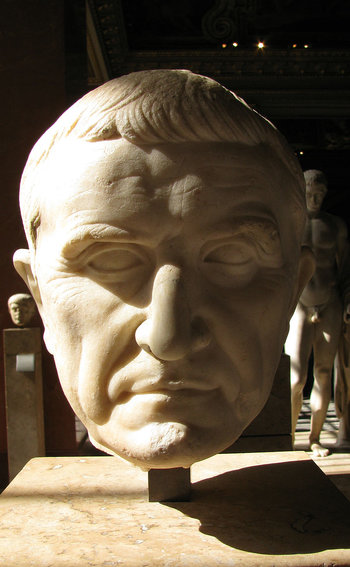 "A man is not rich unless he can raise an army at his own expense"
Advertisement:

Marcus Licinius Crassus (c. 115 BC - 53 BC) was an Ancient Roman general and politician and an important figure in the late Republic. He was a contemporary of Julius Caesar and Pompey the Great, with whom he formed the First Triumvirate, an alliance which saw the trio dominate the Republic in the 50s BC.

Crassus made his mark as a fellow conspirator of the dictator Sulla Felix, where his boon companion was Pompey himself. His father was targeted and killed by the Marians, forcing him to side with Sulla when the latter retook Rome. Crassus commanded the right wing of Sulla's army at the decisive battle of the Colline Gate, which left Sulla in control of Rome. Over time, Crassus amassed an enormous fortune through property speculation, moneylending and slave trading. His riches far outstripped that of even his wealthiest contemporaries: Plutarch put his wealth at 7,100 talents, or 229 tonnes of gold. Pliny the Elder claimed Crassus was worth 200 million sesterces, on a par with the Roman treasury itself.note By one modern estimate

, to the extent that it means anything, he was worth the equivalent of $169 billion, twice that of Bill Gates and just a few billions below Elon Musk.

His methods of acquiring wealth were unscrupulous, and earned him an enduring reputation for greed and avarice. He took advantage of the proscriptions of Sulla's reign to buy up the property of outlawed patricians and enemies which showed up on the lists, and was noted to add names onto the list based on how much Crassus thought their property would be worth on Rome's real-estate market. Such greed took even Sulla by surprise. During fires in the city (a frequent occurence in the ancient world), he would buy burning houses and ones adjacent to them at knockdown prices, then a team of slaves he had on standby would put out the fire and rebuild the property (if the owner refused to sell, it would be left to burn). Crassus would often then lease the property back to the person he had just bought it from.

Crassus always felt that despite his wealth, he was not respected or honored enough by Rome. Many senators and other eminent men in Rome regarded him with distaste, either because they remembered him profiting off Sulla, or they generally saw him as a vulture-like predator of other people's life and property. His family was of old optimate stock, and his father had been consul in 97 BC. Another of his relatives, Lucius Licinus Crassus, was regarded by Cicero himself as Rome's greatest orator. Among those who remembered Crassus Orator, the younger Crassus was seen as a Heroic Wannabe, a poseur, and Nouveau Riche.

As such, Marcus Crassus sought repeatedly to extend his circle and influence. He built up a huge network of clients (men in his debt, either financially or for favours rendered). He was known as a glad handler, courteous to all who greeted him, however low their rank. He was generous to friends and clients, paid off debts of prominent Romans and gave out interest free loans (though was known to be particularly zealous in recovering money loaned out). Considered a fine orator in his own right, he frequently advocated for defendants in court cases, even cases that were considered hopeless, another way of placing others in his debt. In an age when prominent Romans regularly faced prosecution by their peers for their misdeeds, no one ever dared bring one against Crassus, such was his clout.

In 73 BC a slave revolt broke out in Capua. Initially a small band, the slaves, led by a man named Spartacus (yes, that one), defeated every Roman force sent against them, including two consular armies in 72 BC. The rebels grew into an army of over 100,000 people, ravaging southern Italy and threatening the city of Rome. Crassus stepped forward and offered to deal with the revolt by raising his own legions at his own expense. Crassus' methods were harsh (he reintroduced the brutal punishment of decimation after some of his troops fled from the battlefield), but proved effective. Eventually Crassus cornered Spartacus' slave army and defeated them. Crassus had 6000 captured slaves crucified along the Via Appia, both as a punishment and to serve as a warning to anyone else who would consider rebelling against Rome. A small number of slaves who survived the battle ran into Pompey's legions, which were returning from a campaign in Spain, and were easily mopped up. Much to the chagrin of Crassus, Pompey would claim that while Crassus had defeated the slaves, he had ended the war, which fuelled Crassus' dislike of his rival. Despite the serious threat the slaves posed to Rome, they were not considered a Worthy Opponent, and thus for defeating them Crassus was not awarded a triumph, but only received the lesser honour of an ovation.

Nevertheless, his defeat of the slaves helped him win the consulship in 70 BC, along with Pompey. According to Plutarch, the two men did not get along, disagreed on almost everything, and as a result their consulship accomplished almost nothing. Around this time, Crassus also became the patron of Julius Caesar, funding Caesar's election to the post of Pontifex Maximus in 65 BC. Despite Crassus being an optimate and Caesar being a populare, both were ambitious outsiders, and the two of them became friends. In 60/59 BC, Caesar brokered an alliance between the three of them, later known as the First Triumvirate: in return for Pompey and Crassus' support of his election to the consulship, he promised to enact laws wanted by both men, which had been frustrated for years by their enemies in the Senate. Pompey wished to grant land to his veterans, Crassus wished to relieve the debts of the publicani, with whom he had close links. With their support, Caesar was duly elected Consul and fulfilled his promises to both men by passing the laws they wanted.

At the outset, Caesar was decidedly the junior partner in the alliance. Pompey was seen as Rome's greatest general and conqueror, Crassus was the richest man in Rome, Caesar was a lawyer whose teenage years included a brush with Sulla's proscription list. But news soon reached Italy of Caesar's victories in Gaul and his ultimate conquest of the country, earning him such wealth and prestige that he threatened to upstage his two allies. Crassus and Pompey were elected to a second consulship in 54 BC but once again accomplished little. Crassus once again sought military glory.

He secured the governorship of Syria, not only a very wealthy province, but also near to Parthia, one of the few kingdoms left in the known world not already conquered by the Romans. It seemed an attractive prospect for glory and booty, and Crassus may also have had in mind Pompey's easy victories in the region. Even among the Romans, who never needed much Pretext for War, Crassus' plans to invade Parthia attracted strong opposition. He nevertheless left for the east, and crossed into Parthia with seven legions. However, it had been almost twenty years since Crassus, now 62-years-old, had last seen action during the slave war, the invasion was poorly planned note Crassus refused significant amounts of reinforcements (numbering similarly to his own forces) from Armenia to march toward Parthia as quickly as possible... through the desert., and the Parthians were a more formidable foe than expected. Crassus' army, mainly consisting of infantry, was easily outmanoeuvred by the Parthian horse archers in the desert and suffered a major defeat at Carrhaenote Not to be confused with Cannae, the site of another famous Roman defeat, at the hands of Hannibal in 216 BC.. The defeat was so bad the Parthian king thought it made the commander at Carrhae, Surena, look too good and had him executed out of envy. Crassus lost heart when he learned that his son Publius had been killed in the fighting. Crassus himself was killed soon after when a fight broke out during a parley with the Parthians.

There are two legends about how Crassus died. In one version, the Parthians poured molten gold down his throat as a reference to his thirst for wealth. In the other version, Crassus was killed ignobly but then the Parthians massacred the rest of his forces, found one of his soldiers who had a near-likeness to Crassus, and they dressed him as a woman and staged a mock Roman triumph, while Crassus' head was used as a prop in a production of Euripides' Bacchae.

Crassus' death also had major implications for the Republic. Without Crassus to counter-balance Pompey and Caesar, their alliance steadily deteriorated, culminating in Civil War a few years later. The Shocking Defeat Legacy of the Romans at the hands of the Parthians was traumatic enough that many Romans made vengeance against the Parthians, and getting back the captured legionary Eagles, a top priority. Caesar was planning an invasion of Parthia at the time of his assassination (said event was planned because senators believed Julius would succeed where Crassus failed and that this victory would make him and his populare constitutency unshakable). Later Mark Antony did invade Parthia, only to lose even worse than Crassus did. It was Augustus who finally managed to return the Eagles back to home, albeit by diplomatic means.

Crassus in modern Historical Fiction almost always gets a Historical Villain Upgrade. His overall sleazy profile and background, along with the fact that his biggest military success was crushing a slave revolt, makes it hard for a modern audience to see him in the light of the Roman era. He tends to be Overshadowed by Awesome and is usually a supporting character in the stories of his more celebrated contemporaries Caesar, Cicero and Pompey, or otherwise the Villain Antagonist/Evil Aristocrat to The Hero Spartacus. A lot of fiction has also been devoted to survivors of Crassus' army from Carrhae.