It Has Been an Honor 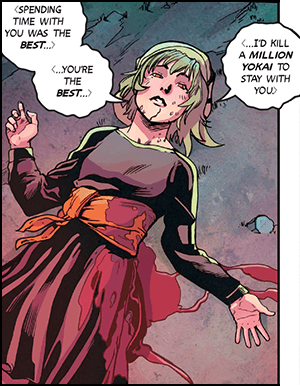 "Gentlemen, it has been a privilege playing with you tonight."
— Wallace Hartley, Titanic
Advertisement:

Honor, loyalty, camaraderie. Some people swear by it, others quietly live by it, many ignore it altogether. When you are ready to say your Last Words to a friend or ally, what would be the most appropriate words to say between two Proud Warrior Race Guys, or, really, anyone who's feeling honorable and doomed at the moment? "It has been an honor... to fight beside you." Often followed by a response like: "The honor has been mine."

There is a simplicity in this statement that you rarely find; saying this will usually be the only thing you need to say, then you can make your Heroic Sacrifice or face your Bolivian Army Ending. Of course, this statement is frequently followed by the arrival of The Cavalry. Often a part of a Pre-Sacrifice Final Goodbye. Sometimes spoken to an enemy by the Worthy Opponent. May be the demonstration of Fire Forged Friendship, even if they left it to the last minute to acknowledge it.

The sentiment can be implied rather than spoken directly, through Something They Would Never Say, O.O.C. Is Serious Business, a handshake, salute or even a Precision F-Strike. Often a cause of Manly Tears, both for the characters involved and the audience. It may also be given a little gallows humour through more flippant variants such as 'It's been nice knowing you', which can be played either for comedic irony or poignancy depending on the source.

Note that only one character has to be certain of death for this trope; in the face of an impending Heroic Sacrifice (where More Hero than Thou is clearly ridiculous), the other characters may say it to the sacrificing hero, or the hero may say it to those who will survive. However, there is a chance that any hero who says those kinds of words might end up surviving the ordeal if Deus ex Machina comes into play such as getting outside help from someone else.

May feature in the Final Speech.

Compare So Proud of You, I Die Free, Do Not Go Gentle, Face Death with Dignity, Obi-Wan Moment. One way to subvert this is to set up for It Has Been An Honor and have the character deliver a Dying Declaration of Hate instead.

Not always, but this can be a Death Trope. So beware of spoilers!

Alternative Title(s): It Has Been An Honour