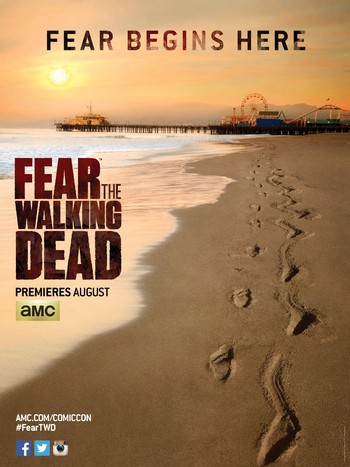 "When civilization ends, it ends fast."
"You don't get tired of surviving. You just push on. You- you got to."
— Alicia Clark
Advertisement:

Further distinguishing Fear the Walking Dead from its big sister series is its premise and place in the timeline. The Walking Dead kicks off two months into the apocalypse. Fear the Walking Dead shows the Zombie Apocalypse in its early days, as news reports begin to come in of a strange virus sweeping the country. What follows is the struggle of a Los Angeles family to survive during the ensuing mass hysteria and the chaos of the collapse of society as the dead begin to rise. A Time Skip takes place between Seasons 3 and 4, catching it up to the main show’s timeline at the end of Season 8.note As of Season 7 this show is currently several years behind the main show due to another major Time Skip in the latter.

Has a recap page and a character sheet.

These survivors show how possible it is to start over in a world filled with zombies.

These survivors show how possible it is to start over in a world filled with zombies.