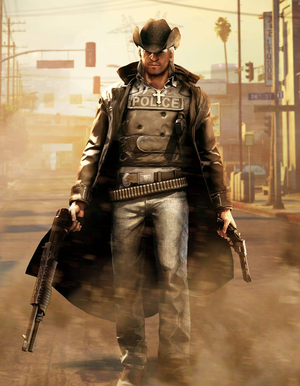 "Hands where I can see 'em, pardner."
"I'm a cowboy, on a steel horse I ride,
And I'm wanted—dead or alive."
— Bon Jovi, "Wanted Dead or Alive"
Advertisement:

The Western genre is a rich one, but has been decidedly played out over the years, to the point where it's hard to do a Western series without looking like you're ripping off a rip-off. The easiest way to revitalize the genre is to set it in the future, when man's expansion onto other planets has created a similar state of lawlessness and grit—hence the Space Western.

A less popular choice is the New Old West, in which Western traditions and tropes are shifted forward a hundred or so years into the modern day. Now the bandits drive pick-up trucks or ride motorcycles, the outlaws hole up in motels, and the great plains of America are surrounded on all sides by airports, highways, and cities. Of course, this means that it's harder to do stories about outlaws because advances in technology mean that it's much easier for law enforcement agents to pursue and capture criminals. As a result, many New Old West stories are about the perceived loss of freedom in America now that such days are gone.

There's an overlap with the Twilight of the Old West trope if the New Old West story is set in the early part of the 20th century and is about elements of the Wild West fading away. If there is a fantasy or supernatural element to the story, expect an actual cowboy, or some other person from the actual Old West, to somehow make an appearance.

Because of its proximity to Texas, the overwhelming power and presence of drug cartels, and the numerous poor desert towns that any criminal can hide in, a good number of New Old West stories take place South of the Border in northern Mexico. California, Arizona, New Mexico, and — of course — Texas itself are also popular locations for a modern Western story for the same reasons as El Norte.

Not to be confused with Cowboy Cop, although some overlap is possible.