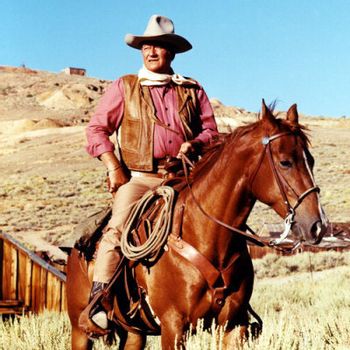 The common possessions of a Working Cowboy include: a saddle, a saddle blanket, a rope, some saddle bags and whatever personals he can fit in them (including his hat), as well as a rifle and a six-shooter. If he has his own horse he is well off (relatively) for a cowhand.

Drifter Cowboy: Largely similar to the Working Cowboy, but he has no set ranch that he's attached to. He instead wanders semi-nomadically between ranches and towns, looking for work, staying when he finds it, and moving on once it dries up. Due to having no strong ties to his current workplace, he may be looked on with distrust and remain at a distance from other characters.

Philosopher Cowboy: This is The Smart Guy who decides he prefers honest work amid the outdoors rather than the City Life. Plutarch was a big read for literate cowboys, along with the Bible, parts of Shakespeare and whatever small books would fit in a saddlebag. May be called upon to say a few words on portentous occasions. Can come very close to the Warrior Poet.

Cowgirl: The Distaff Counterpart of the Cowboy. Generally a Plucky Girl in Western garb, who can ride and shoot as well as any man (except the protagonist), but who is seldom seen doing any of the filthier ranch chores. In fiction, almost always the love interest for the protagonist, or the young man the protagonist is helping this week. May be a plentiful source of titillation (though to be fair, cowboys can be that too.) and can overlap with Farmer's Daughter. Not to be confused with females who are a Little Bit Beastly and bovine-based, or the result of mixing Cute Monster Girl and Our Minotaurs Are Different. Of course, nothing's stopping you from making a cow-girl a cowgirl, or vice versa.

On the plains, larger ranches based around the water holes are to be expected with a significant number of Working Cowboys, with a scattering of Rodeo Riders.

In the mountains expect smaller ranches, with the result of more Lone Cowboys and Philosopher Cowboys (they like smaller operations where their intellect can be appreciated), and the ranches are more open to a Drifter Cowboy.

In the deserts and badlands, expect cowboys to be closer to the Indians, with two or three characters referred to as Apache, or raised by Apache. A lot more emphasis is placed on water scarcity, similar to the mountains in character composition, but expect more outlaws, both as rustlers and among the legitimate Working Cowboys. This is a land for hard men, and if you do the work people don't ask questions.

Similarly, in fiction, gay cowboys are relatively uncommon, despite the fact that historians agree that many cowboys were gay men who moved from cities to ranches in order to escape persecution. (Even though the rural areas associated with cowboys are expected to be more politically conservative, and therefore less accepting of open homosexuality).

Mexican and Mexican-American cowboys, called Vaqueros, tend to fare better in media presentations, known for their riding and roping skills. Vaqueros are in fact the precursors to what we consider cowboys. It's from them that we get the equipment and the word "rodeo" and many of the events included in it, after all. This used to be mixed with unfortunate negative stereotypes, however. Many early vaqueros were Amerindians who worked in missions in colonial New Spain. Vaquero was anglicized as "buckaroo," which became a term for cowboys in the Great Basin and California.

Some say that the Cowboy is the third faction in the war between the Pirate and the Ninja, but the Cowboys work for a living, thank you kindly. Besides, they're more concerned with their traditional enemies: Indians, farmers, shepherds and rustlers.