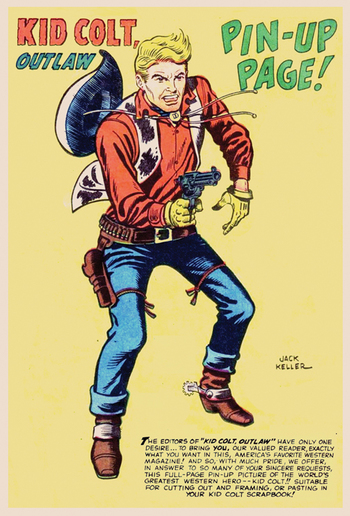 Kid Colt is a cowboy whose adventures have taken place in numerous western-themed comic book series published by Marvel Comics. He is the longest-running cowboy star in American comic-book publishing, featured in stories for a 31-year stretch from 1948–1979, though from 1966 most of the published stories were reprints.

Kid Colt was a nickname for Blaine Colt, a cowboy who was renowned for his quick draw and temper. He lived a relative easy and peaceful life until his father was murdered by bandits. Colt was furious and devastated with grief over his father's murder and sought out to find those that where responsible. When he finally found the murders, he challenged them to a gunfight. Kid Colt won and killed his father's killers. He was however wrongly accused of murder when he did this, even though it was a fair gunfight (which was not illegal in the Wild West during this period of time). He was branded an "Outlaw" and got a price on his head. From that point on, Colt was on the run for the law wherever he went. He traveled to many places in the West, trying to do what was right in fighting crime, but also himself trying to stay out of the long arms of the law.

Tropes associated with Kid Colt and his comics: