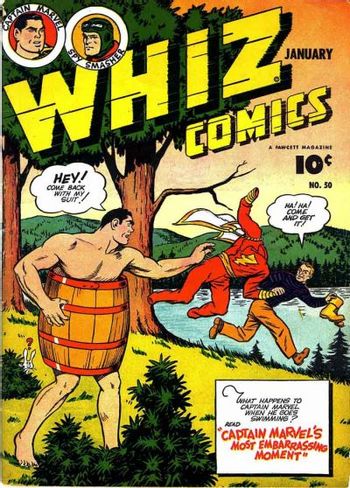 How did he get a barrel in the middle of nowhere?
Scott: Give us our clothes back, damn it!
Other Wormers: Please?
Tina: Nice undies!
— Now and Then
Advertisement:

How distressing: Having taken a brief moment to unwind, The Hero, his friends, his girlfriend(s) or some combination thereof decided to go Skinny Dipping. And, wouldn't ya know it, someone took off with their threads!

Various Naked People Are Funny antics ensue as they try to obtain new clothing before their nakedness is exposed to all the world. Usually results in Naked People Trapped Outside.

This can also be played from the opposite perspective, where the main characters set out to steal other people's clothes in this manner. In either case, the thievery almost always works.

Note that in kid-friendly works, the victim will usually be left in a swimsuit or underwear.

Related to Outdoor Bath Peeping and Slippery Swimsuit. Can either be used for comedy or, most often if the character is female, for some Fanservice.