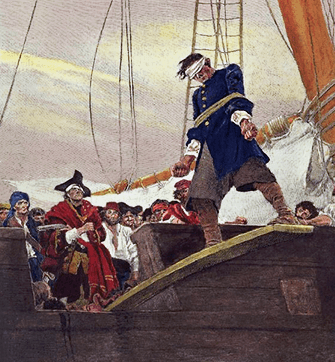 I've been to Hell and Back, and this time I'm gonna jump!
The Doctor: A plank?
The Captain: The theory is very simple. You walk along it. At the end, you fall off.
— Doctor Who, "The Pirate Planet"
Advertisement:

Standard Pirate punishment: extending a wooden board or similar object over the side of a ship, and forcing the intended victim to step off the far end and presumably drown or be eaten by sharks or crocodiles.

This is a good scene for building suspense, if taken slowly. It is also an excellent opportunity for last-ditch-bravado and summing up antagonistic relationships. The plankee often tells the villain exactly what he thinks of him, and vice versa.

The victim is usually bound. An occasional twist is for an unbound victim to grab the plank on the way down or otherwise use it as a springboard into combat.

Real Life pirates very rarely if ever executed people this way: as with The Mafia and their alleged fondness for Cement Shoes, they usually preferred to just shoot 'em and then dump the body overboard. Considering that in the sail-ship era most sailors couldn't swim, even that much effort could be excessive compared to simply tossing the victim overboard; blinding, binding, weighting them, or giving them a plank, would only mean wasting a perfectly good planking or rope that could be used to maintain the ship.

Binding was traditionally used in one case only: as a punishment for murder. In that case, the body of the murdered sailor would be bound together with the killer. A related punishment is Keelhauling, where the victim is thrown overboard with a rope tied to them, then hauled across (or if they're really unlucky, along) the ship's keel and pulled up the other side. This wasn't necessarily fatal, but the barnacles that are usually found attached to the bottom of any ship made this a painfully unpleasant experience.

The intended function of a ship's plank was to allow the crew to sail up to and walk onto another ship, in case you were wondering. One possible interpretation of the myth was the pirates' habit of using the crew of the captured ship to drag valuables (which were, well, the purpose of the attack) to their own ship, walking the planks that formed a "bridge" between the two vessels. When the pirate ship departed, if the attackers did not really feel like shooting the crewmen dead and/or taking them as captives, they could just make the survivors jump from those planks into the water in a desperate attempt to reach their own ship. Not that it added a lot of chances of survival (considering the ship in question could be set on fire), but made the pirates' departure more, ahem, entertaining.

Since Space Is an Ocean, Space Pirates have a parallel punishment with a similar dramatic role: the victims are Thrown Out the Airlock. Sky Pirates seem to prefer the more old-fashioned plank—not surprising, since the airship's altitude would make it especially dangerous to the hero.

See Ordered to Die for other forms of, well, ordering people to die.

Captain Barbossa forces Elizabeth and Jack to walk the plank.

Captain Barbossa forces Elizabeth and Jack to walk the plank.