Pinball / Pirates of the Caribbean (Stern) 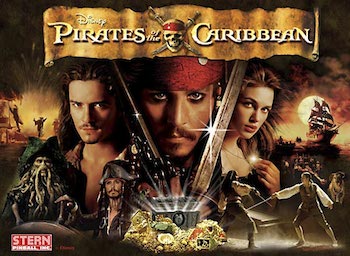 Yo ho yo ho, a pirate's life for me...
Advertisement:

The game puts the player in the boots of Captain Jack Sparrow as he stumbles through various misadventures. Engage in sword fights, fire on Port Royal, collect your pirates, then play Liar's Dice and assemble a crew of 100 souls. Prove your mettle by shooting the pirate ship on the playfield and sinking it, then Fight Davy Jones, Destroy the Kraken, and use the Key to open the Dead Man's Chest. Along the way, you'll Catch the Wind and collect various bits of Treasure, but only the Pirate King will be able to complete the eight tasks and four points of the Compass to invoke Four Winds Multiball and come out on top of the Gauntlet of Pirates.

Most players consider Pirates to be a solidly enjoyable game, one that's fairly complex but not fantastically deep, with a a good spread of features to keep players engaged. The biggest downside is the sparse voicework, which consists of clips lifted from the movies, but lack any enthusiasm or game-specific callouts. As with other tables by Dennis Nordman, Pirates is a pin that's less about technical wizardry and more about simply having a fun time on the high seas.

Not to be confused with Jersey Jack Pinball's later pinball adaptation of the series, or the Pirates of the Caribbean home pinball game by John Popadiuk and Zizzle Toys,

Pirates of the Caribbean demonstrate the following tropes:

Alternative Title(s): Pirates Of The Caribbean 2006