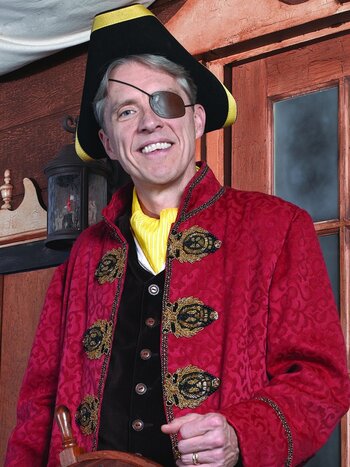 Patch the Pirate (or The Adventures of Patch the Pirate when aired on radio) is a Christian audio comedy/adventure series created by Christian songwriter and evangelist Ron Hamilton, and was inspired by his experience with having eye cancer in his left eye.

In 1978, Ron Hamilton was diagnosed with cancer inside his left eye, necessitating its removal and leaving Hamilton to have to wear an eye-patch. In the time that followed, Hamilton would often get called a pirate by children at church and abroad thanks to his eye patch. Deciding to embrace his new reputation as a "pirate" instead of having to explain why he had a patch to everyone, this was ultimately the inspiration for the audio series for kids that you are reading about now.

Starting in 1981 with song compilation Sing Along with Patch the Pirate, one new installment of the series has been released every year since then. (Except in 1993 where a bonus Christmas Episode was released along with the one for that year.) The story details the adventures of Patch the Pirate, his faithful sidekick Sissy Seagull (played by Ron Hamilton's wife Shelly), and their crew of kids as they sail their ship the Jolly Roger around a world filled with unusual places and quirky characters. Most episodes are centered around a specific moral that is usually derived from Christianity (though other smaller side lessons are sometimes learned) and are notably filled with a variety of songs.

This series is very well-known among Christians and has sold several million copies since its inception.

Shouldn't be confused with Patchy.

open/close all folders
Installments of the series
Advertisement: