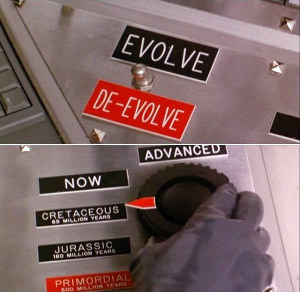 So easy, even a Goomba can use it.
"DNA recombination destroys logical and emotional brain function, leading to complete regression to Neanderthal state."
— Neanderthal Regression symptom, Plague Inc.
Advertisement:

A fine weapon and/or experimental prototype that does one thing and one thing only: reverse the effects of evolution on creatures! In particular, this device is often used to turn humans into something more apelike, often a modern Gorilla, or else a Neanderthal. A bird or lizard can be turned into a giant dinosaur that can then be used to terrorize all those people that called you mad. That'll show 'em.

Often used for comic effect, this is an understated device that could cause chaos. Consider how much you use that is designed for use by a single species only. Ape hands could crush a keyboard or phone, it would be hard to convince a saber-toothed cat to use a litter box, and dolphins and whales would sprout legs and doggy paddle to the surface. And that’s if you’re lucky and keep cognitive abilities across Evolutionary Levels.

If you're evil enough, you may turn every living organism back into single-celled organisms or primoridial soup.

in Real Life, a creature's cells do contain "dormant" genes from its ancestors. However, the DNA changes would have to occur in pretty much every cell in the body to change species, and it's quite likely that some of the other genes essential to a species' ancestor have been mutated or damaged beyond repair over thousands, or millions, of years. Even if genetic reversions did take place, the existing non-cellular components of a creature's body wouldn't be affected by alterations in DNA, so features like hair or skeletal framework ought to remain the same. (Moreover, the DNA is used to construct an organism from an embryo, so a changed DNA in an adult organism would have no genetic mechanisms to "re-construct" it, and it will likely just die in short order from metabolic imbalance.) Also note that this trope tends to result in the target turning into something that looks like a known extinct species, even though it's unlikely that most fossils represent actual ancestors of modern species (for example, modern birds are *not* directly descended from Archaeopteryx). To say nothing of how inaccurate it is to depict a modern species devolving into another modern species (such as a human into a chimpanzee).

Koopa employs a special device to transform humans evolved from dinosaurs back into dumb dinos.

Koopa employs a special device to transform humans evolved from dinosaurs back into dumb dinos.