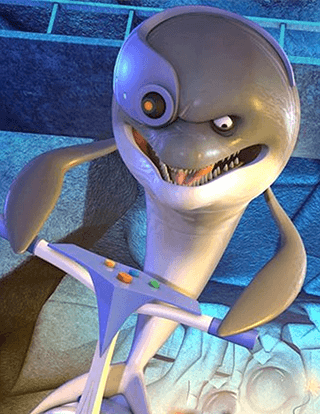 Villainy is his sole porpoise.
"Never trust a species that grins all the time. It's up to something."
— Pyramids
Advertisement:

You know about nice, friendly dolphins, right? This guy is basically the exact opposite.

The trope of the Friendly, Playful Dolphin has become so well-known in recent years that it has become popular for writers of various works to subvert it by instead depicting them as cunning, sinister, and even evil animals — in essence, an Alternate Character Interpretation of them as species. This is mostly found in comedy works, much like the similar Hair-Raising Hare trope, which also relies on subverting the audiences expectations of a typically "cute" animal.

Ironically, this trope is actually closer to reality than the one it began as a subversion of, since recent research has shown that bottlenose dolphins often display behavior that would be considered sociopathic by human standards, including a tendency towards violence and recorded instances of infanticide and aggression towards other cetaceans. Of course, as they aren't human, this is more likely a case of Blue-and-Orange Morality. Chances are, though, that most of the writers using this trope were not aware of that fact, although some probably are.

Orcas, aka killer whales, also often fall under this trope. While they do not have the violent social interactions of bottlenose dolphins, the fact that they feed on seals, penguins and other dolphins makes them common antagonists in stories about sea animals when sharks aren't being used. And even then orcas will play this on the occasion the shark is a protagonist, due to the fact orcas also eat sharks. However, like "typical" dolphins, they're equally likely to be depicted as cute and friendly even as they are respected as master hunters of the sea.

Contrast Heroic Dolphin and Friendly, Playful Dolphin. Compare Monster Whale for the next step up in monstrous cetaceans, Monstrous Seal and Wily Walrus for other dangerous sea mammals, as well as Maniac Monkeys and Foul Fox for another "evil" take on animals noted for their intelligence.