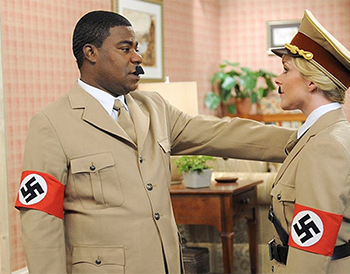 The Boomerang Bigot is a character who thinks that all members of Group X are an inferior race/species...even while being a member of Group X themselves. Despite the obvious contradiction, the Boomerang Bigot doesn't see anything wrong with their view, and will continue to persecute Group X proudly.

Differs from You Are What You Hate in that there is no ignorance, secrecy, or self-doubt involved. The Boomerang Bigot knows they're a member of the targeted group — and others know it, too — but remains unabashed about holding their views, possibly in an odd form of Honor Before Reason. However, it is possible for the two tropes to overlap. A bigot's membership in the hated group might be secret to most people but known to a few. If they continue to express sincere hatred towards the hated group, even when in a situation where their secret will not be exposed, then they might show shades of both Boomerang Bigot and You Are What You Hate.

Such behavior almost always occurs for laughs. If not... be afraid.

Has also been known in the mainstream as "Self-Hating", with the ethnic group following after (such as "Self-Hating Black" or "Self-Hating Jew"). A more technical term is "internalized bigotry". If they're not self-hating and simply criticize the behavior of their group, they might just be insisting that they Stop Being Stereotypical.

If done poorly, this trope can lead to Unfortunate Implications, such as that being bigoted is okay as long as it's self-loathing bigotry - or, on the other hand, that a person must be prejudiced in the "right" way because otherwise, they'll be a Category Traitor.

A supertrope of Misanthrope Supreme. Also see Noble Bigot, Pretend Prejudice, Cultural Cringe/My Country Tis of Thee That I Sting, Hunter of His Own Kind, Humans Are Bastards, Even Nerds Have Standards, Some of My Best Friends Are X, Internalized Categorism, N-Word Privileges, Female Misogynist, I'm a Man; I Can't Help It and Psychological Projection. Rich Kid Turned Social Activist may be Old Money who hates Old Money. Gayngst and Armoured Closet Gay are related tropes for self-hating queer characters, and Effeminate Misogynistic Guy for a less direct form of boomerang-bigotry. The most extreme cases may commit Genocide from the Inside, or attempt to do so. Compare Sub-Par Supremacist. See also Self-Deprecation.

This is disturbingly Truth in Television, but let's not get into that, shall we?

Bertrand is a conduit that hates conduits so much, he engineers a super-powered arms-race just so that humanity can band together and kill all of them.

Bertrand is a conduit that hates conduits so much, he engineers a super-powered arms-race just so that humanity can band together and kill all of them.