All spoilers for Inuyasha will be left unmarked. You Have Been Warned! 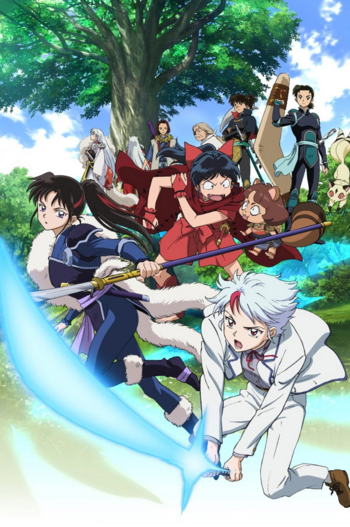 "Towa and Setsuna. Between us half-demon twins, two different worlds exist at the same time. Human and demon. Feudal era and present day. Peacefulness and war. Joy and sorrow. Dreams and reality. One moment and eternity. And finally, love and hate. A Feudal Fairytale, Yashahime: Princess Half-Demon. We'll keep moving forward through the hurdles of destiny!"
— Opening Narration
Advertisement:

Yashahime: Princess Half-Demon (Hanyō no Yashahime) is a sequel to Rumiko Takahashi's Inuyasha that first aired on October 3, 2020 on Nippon TV. Like its predecessor, the anime was produced by Sunrise, and in the similar story and production style as Dragon Ball Super, Takahashi is both the story supervisor and outline creator for the series. A manga adaptation is currently in progress, penned by Takashi Shiina, the creator of Ghost Sweeper Mikami and Psychic Squad.

Three and a half years after Naraku's defeat, Inuyasha, Kagome, and their friends live a peaceful life. This is cut short when an old enemy of Kikyo's, the demon Root Head, awakens. Eventually, they defeat the demon and resume their lives for now...

Years later, Inuyasha and Kagome now have a daughter named Moroha, and Sesshomaru now has fraternal twin daughters named Towa and Setsuna. When she was four years old, Towa was separated from her sister, and suddenly gets sent to the present day and is taken in and raised by Kagome's brother Sota Higurashi.

Ten years later, Towa reunites with her sister, but circumstances would strain their relationship. To her shock, Setsuna does not remember her and much of her past. Setsuna has become a demon slayer working for Kohaku and Moroha has become a wandering bounty hunter. Sango and Miroku's son Hisui has also become a demon slayer. After returning to the Feudal Era, she goes on a quest with her sister and cousin to prove her identity and recover Setsuna's memories.

After the last episode of season one, Sunrise, and the voice actresses for Towa, Setsuna, and Moroha stated season two had been confirmed

The English dub of the anime premiered on Toonami on June 26, 2021.