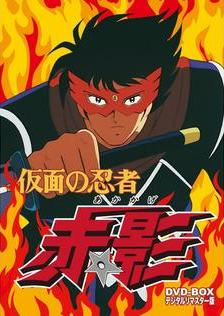 A manga by Mitsuteru Yokoyama which ran in Weekly Shonen Sunday from 1966 to 1967, turned into a tokusatsu and then an anime in 1987, Kamen no Ninja Akakage is the tale of three ninjas during the Warring States period of Japan. They protect Japan from various warlords and their kaiju. No, they don't use giant robots or anything, they use much more inventive methods than that!

Compilation Movies of the tokusatsu series were released in English as Ninjascope and Watari. The Film of the Series was produced in 2001, and is available in English as Red Shadow.

Kamen no Ninja Akakage provides examples of the following tropes: