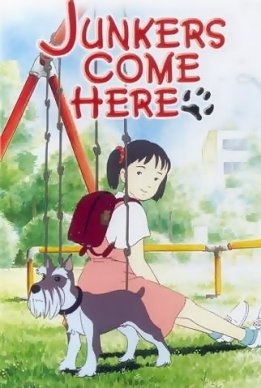 A 1994 Japanese animated film produced by Bandai studios, Junkers Come Here focuses on Hiromi, a grade school student from a fairly well-off family who has now to deal with her parents' divorce. Having long been a subject to a mother who comes home late every night and a father who is usually out of the country, Hiromi is raised mostly by her maid, Fumie, and her (attractive) tutor, Keisuke. Thankfully, she has her loyal and adorable dog Junkers for company. Oh, and by the way, only Hiromi knows it, but Junkers can talk!

Directed by Junichi Sato of Sailor Moon and Kaleido Star fame, with character designs by the late Kazuo Komatsubara.