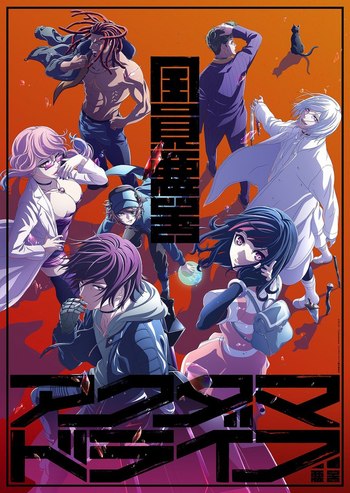 Akudama Drive (Japanese: アクダマドライブ, Hepburn: Akudama Doraibu) is a 2020 Japanese cyberpunk anime television series produced by Pierrot and Too Kyo Games. The series was directed by Tomohisa Taguchi and written by Kazutaka Kodaka, who aimed to create a series consisting of rebellious themed characters.

Once upon a time, war between the Kanto and Kansai regions caused the world to split apart with Kansai becoming the vassal state of Kanto. However, the power of the government and the police has begun to wane while crime of all variety has skyrocketed. The perpetrators of those crimes are known as "Akudama." As these Akudama gather together in one place, their aesthetics will clash and a ridiculously ordinary girl will be caught up in their world of crime and mayhem.