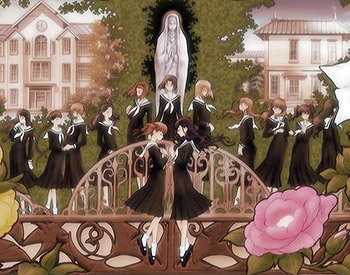 A school that enrolls only male or female students and a trope that which, even today, has Truth in Television—although it's mostly just a thing at private schools (particularly if they're religious schools and/or boarding schools). Many educators in such institutions defend the practice not just out of conservative attitudes, but also for more practical concerns. They claim that female students perform better without male students around as they're more likely to engage the subject material as they are less likely to be afraid of being perceived as "too smart" to attract sexual attention. Or at least, that's how the theory goes.

There is, of course, a feeling in many quarters that Hormone Addled Teenagers will be unduly distracted by romantic concerns to really care at all about what the teacher in front of the class is talking about as well. As one quotation goes, "Any boy who can concentrate on algebra with a girl in the room has something wrong with him."

Single-sex colleges exist as well. Colleges for (usually) women only called Normal Schools go back to the 1600s, from the original École Normale founded by Saint Jean-Baptiste de La Salle in 1685, usually for the purpose of instructing graduates of the mainline (up through High School by current standards) in order to become teachers. These schools still exist, however they are generally gender integrated now and were more commonly called Teacher's Colleges by the mid-20th century (most have now expanded their undergraduate degree offerings to become community colleges if not full-fledged universities or campuses of a larger university). Male-only also used to be the default for universities, and will still crop up in most period pieces. They don't really exist anymore (leaving aside R.C. seminaries, Rabbinical colleges, etc. there are six men's colleges in the US), and women's colleges are a dying breed as well (about 60 in the U.S.), so it's usually not Truth in Television past high school.

It should be noted however that different countries have different norms. For example, the vast majority of schools in Ireland are still one gender schools. In Australia, many Catholic schools, other private schools and selective public schools are single-sex, as well as quite a few comprehensive schools. Islamic countries such as Saudi Arabia, Pakistan and Iran have similar policies. In America, while religious schools commonly practiced single-sex education, regular public schools have always been open to male and female students (with a few exceptions).

Viewers can expect lots of Ho Yay or Les Yay, respectively, due to Situational Sexuality unless it's explicitly a Yaoi Genre or Yuri Genre series (all-girls schools are particularly a staple in yuri). Another common plot is a Wholesome Crossdresser or a Sweet Polly Oliver infiltrating such school. Hilarity usually ensues.

Since this school more often than not is a private school, expect this trope to overlap with Elaborate University High and Elevator School. Most military schools in the United States are this.

See also One-Gender Race, whose schools are this by definition.