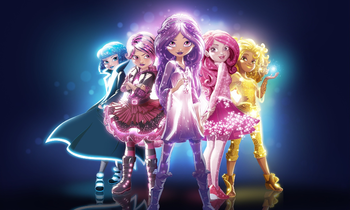 Star Darlings is a Disney-published franchise created in 2015 by Shana and Ahmet Zappa. The franchise focuses on the inhabitants of Starland, who live on a star and grant human wishes. To the Starlings, Earth is Wishworld and we're Wishlings.

Due to a positive wish energy crisis, it's decided that 12 young female Starlings, called Star Darlings, will take up the difficult task of granting young Wishlings' wishes. It's hoped that doing so will provide greater amounts of energy. But finding what, or who, is behind the crisis may prove more difficult than granting wishes, and keeping Starland safe from danger afterwards may be even harder. The Starlings must work together as a team granting wishes in Wishworld and saving Starland from the negative energy, all while keeping their identities as wish-granters hidden.

A series of chapter books and novels are the main story focus. An animated web series

, TV specials, supplementary books, dolls, lifestyle and storytelling apps, and music supplement the series. After January 2017, all franchise activity halted with the cancellation of three planned books and discontinuation of the toyline and web series.