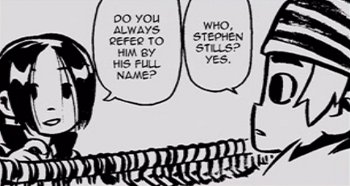 "Dear John Freeman, how are you? I miss you at home, come home safe and soon with Gordon Freeman for thanksgiving dinner. Love mom."
— Half-Life: Full Life Consequences 2: WhatHasTobeDone
Advertisement:

Some characters will stick to formal address, some go straight for the First-Name Basis. Others don't even bother with names. When none of these will do, and the character is not No Name Given or The Trope Without a Title, you get the Full Name Basis. This is a good sign that the character might be a Fish out of Water. Sometimes it is used just because the full name sounds more cool or intimidating, or at least the user believes that it does (especially when it's the user's own name). Obviously, if someone is on a Full Name Basis, a Full-Name Ultimatum loses its effectiveness.

A common subversion is for a character to have their name misinterpreted. This can get really long if said character is also The Magnificent (combining both these tropes leads to Large Ham Title).

Alternative Title(s): Only Known By The Full Name