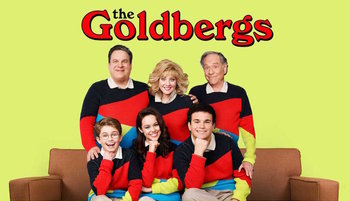 Like your family was so cool in the '80s.
"When it comes to my childhood, I may not always remember exactly when something happened or exactly who was there. But I do know that it was nineteen eighty-something and it...was...awesome."
— Adam Goldberg
Advertisement:

The Goldbergs is an American period sitcom on ABC. The first episode premiered on September 24, 2013 to a viewing audience of 8.94 million viewers. The show revolves around the life of 12-year-old Adam Goldberg (Sean Giambrone) and his family during the 1980s. He regularly has to deal with his older sister Erica (Hayley Orrantia), older brother and middle child Barry (Troy Gentile), and parents Beverly (Wendi McLendon-Covey) and Murray (Jeff Garlin). His maternal grandfather "Pops" (George Segal) is also a member of the main cast. The show features a mix of traditional camerawork and "home video" footage taken from Adam's camera.

Not to be confused with the 1929–55 radio/TV sitcom The Goldbergs, nor with professional wrestler Bill Goldberg.note Though he does have a recurring role on this show as Coach Nick Mellor. A spin-off of the series, Schooled, ran for two seasons.

The show provides the following tropes: