Series / The Ghost and Mrs. Muir 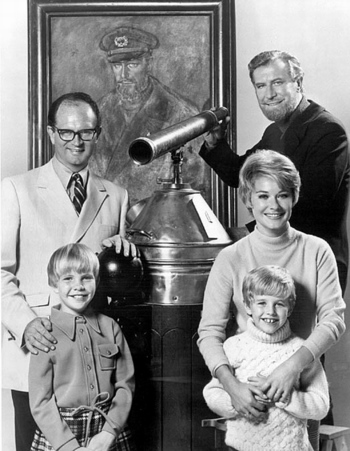 The Ghost & Mrs. Muir is an American sitcom based on the 1947 film of the same name, which was based on the 1945 novel by R. A. Dick. It premiered in September 1968 on NBC, which cancelled it after one season; it was then picked up by ABC for a second and final season.

After lovely young widow Carolyn Muir (Hope Lange), her two children, their housekeeper and the family dog move into Gull Cottage—a quaint old seaside abode near Schooner Bay, Maine—they discover that their new home is haunted by the spirit of its former owner, an old salt named Captain Daniel Gregg (Edward Mulhare). Gregg at first resists this intrusion, but he develops a ghostly love for his uninvited guest. Also in the mix is Claymore Gregg (Charles Nelson Reilly), the captain's venal, cowardly grandnephew who inherited the cottage and rented it to Mrs. Muir.

Tropes in The Ghost & Mrs. Muir include: