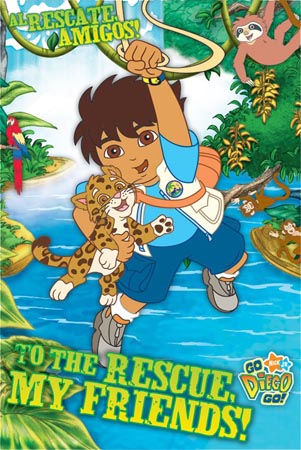 Go, Diego, Go! (2005-2011) is a an animated television series, a Spin-Off of Dora the Explorer. Starring Diego and featuring his sister, Alicia and Baby Jaguar. His adventures frequently involve rescuing animals and protecting their environment. The series which aired for five seasons consisting of 74 episodes premiered in 2005 The show aired in reruns on "Nick on CBS" for 11 months and 3 weeks from September 17, 2005 to September 9, 2006.

The series received favorable reviews from critics and garnered particular acclaim for its portrayal of a bilingual Latino lead character, earning a total of four NAACP Image Award nominations for "Outstanding Children's Program" from 2008–2012, as well as earning Imagen Award and Young Artist Award nominations for Jake T. Austin for his role as the voice of Diego.

Diego: We found out so much about TV Tropes today.
Alicia: And there's a lot much more to discover...
Both: Together!
Diego: Hasta luego, amigos!
Alicia: See you soon!