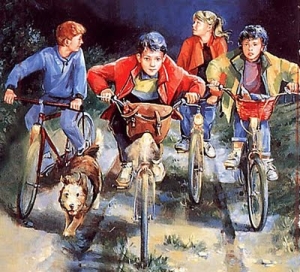 These kids get around.
"Eighty percent of the reason being a kid sucks is you can't drive. You can't just zoom across town whenever you feel like it, you've got to wait for Mom or Dad to get home, or save up your allowance for cab fare, or latch onto the back of a garbage truck. Your ability to participate in adult-level adventures is thus severely limited."
— Cracked.com, 6 horrible lessons Hollywood loves to teach kids

Pre-teens in fiction will wander about their town, the country, or even the world, with little adult supervision or even concern. They'll ride down to their friend's house on the other side of town and go to places that aren't anywhere close to their own house.

It was in the mid-eighties when media-promoted fears of kidnapping and strangers caused parents and society to clamp down on the freedom of children to wander unsupervised.note The disappearance of 6-year-old Etan Patz in 1979, when he was walking two blocks to his school bus stop, was a huge story and helped whip up fears. The 1980-81 "Atlanta Child Murders" by a serial killer helped the change immensely. Also, media fear tactics included FBI statistics on missing children reports — not on missing children cases. If Bobby stops off at Carol's house on his way home from school to play video games with her, and his mommy gets frantic and notifies police, it doesn't matter if Bobby shows up at home an hour later; if he does this four times in a year that's four missing children reports to the tune of zero missing child. Before then, kids were commonly allowed much more latitude, particularly in the summer months, concerning what they did and where they went. While the freedom kids had to run about town still wasn't nearly as great as it tends to be in fiction (parents still needed to know where they were going, when they were going to be back, etc.), they were often allowed to at least take their bikes to local shopping centers, swimming pools, libraries, or woods. This was the particular case in a Close-Knit Community where other adults would notice and intervene in cases of danger.

Unusual travel permissiveness in a story can be an acceptable break from reality. A show involving Timmy and Sally being driven everywhere by their parents wouldn't be very exciting. Parents are, after all, useless and boring.

Compare Minor Living Alone and Invisible Parents for one of the more notable examples of this trope at work and Free-Range Pets for the animal equivalent. See also Kids Driving Cars, which takes this trope to the extreme. One extreme can be the Missing Child.