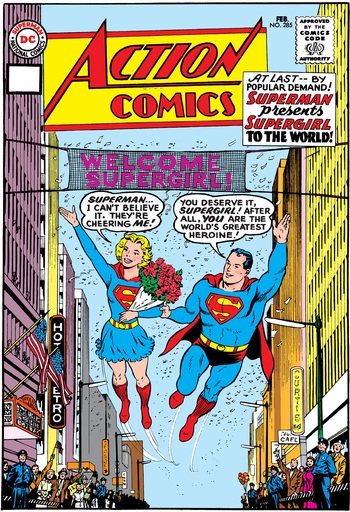 "The Unknown Supergirl" is a Supergirl storyline published in Action Comics #278-285, written, illustrated and edited by Jerry Siegel, Jim Mooney and Mort Weisinger, respectively. It was one of the first multi-part super-hero storylines. Not the first one -that honor probably belongs to The Monster Society of Evil-, but a nine-issue-long story arc was still almost unheard of in 1961, and completely unheard of in Superman comics, whose longer stories up to that point had been some few two-parters.

Kara Zor-El had been forced to remain hidden and operate as Superman's secret weapon since her arrival on Earth. After one year, though, Superman happily declares her training is finally over, and he will call a press conference to announce her existence to the world.

Kara is ready to burst with joy, until her powers suddenly disappear. Her cousin cannot figure out why, but now she has been depowered, he cannot make the announcement. Kara feels distraught, thinking all her effort and hard work for one year was all for nothing. On the plus side, she does no longer need to dodge an adoption which would jeopardize her cover, so she allows herself to be adopted by Fred and Edna Danvers, a kindly couple of Midvale. Kara leaves the orphanage, changes her civilian "Linda Lee" name to "Linda Lee Danvers" and starts adapting to her new life. In the meantime, she is constantly wondering why her powers went away.

The answer lies in the Bottle City of Kandor. Lesla-Lar, a brilliant Kandorian scientist, is jealous of Supergirl and the accolades she will receive when the Earth people learns of her existence. Driven by envy, she sets a sinister plan in motion to replace Supergirl, get rid of Superman and take over the world.

Unusually for the time, the storyline was collected almost in its entirety only six years later in the giant-sized Action Comics issue #360. Since then, it has been collected in Showcase Presents, Archives and Omnibus trade editions.

Tropes found in The Unknown Supergirl: