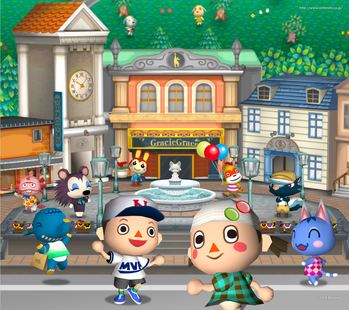 "This is Petalburg. The warm weather makes the locals laid-back and happy. Wow, and talk about unique personalities... Very... individualistic, to put it nicely. Or, not so nicely... Downright kooky..."
— Goombella, Paper Mario: The Thousand-Year Door
Advertisement:

The town is small and filled with quirky, lovable characters. There is a strong sense of community. The audience is a little torn between wanting to live there, and being glad they live someplace else where not everyone knows your business.

This trope is very powerful, perhaps reflecting a desire to somehow make this place exist, even if only in fiction. The Disney Main Street is an example of the strength this trope has to force itself into something like reality.

Be careful, though, as it may have a dark secret underneath its quirky exterior.

For quirky towns in TV series, they will typically begin with the arrival of some outsider authority figure, such as a marshal, doctor or FBI agent, who will initially be baffled by the inhabitants, but soon will turn out to be every bit as quirky as they are.

Although quirky towns are usually small, quirky cities can exist as well. On a smaller scale, see Quirky Household. Generally free of Small Town Boredom, and anyone who says "Nothing Exciting Ever Happens Here" either has lived there long enough that the eccentricity of their neighbors seems normal to them, or is just plain lying. Might also be a Cutesy Name Town.

No relation to Crazy Town, the Rap Rock band who did "Butterfly."