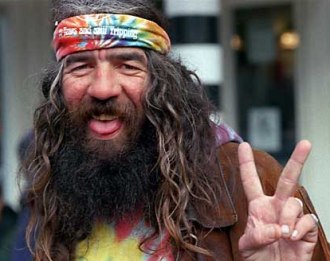 It's all about peace and love, man.
CJ: Can you shoot?
The Truth: Shoot? I'm a hippie! The only thing I've shot is acid. I heard a dude snorted it once. Thought his nose was a kangaroo and the moon was a dog! WOOH!
— Grand Theft Auto: San Andreas
Advertisement:

Hippies are often depicted in television and video games as pot-loving, tie-dyed shirt-wearing, stuck-in-the-'60s types who believe in sexual freedom, celebrating nature and railing against "The Man, man." While this was (and whoah, still is, you know, dude) true to some extent, people still believe a lot of myths about it

and it has been exaggerated (naturally) in fiction, dude.

This stereotype is a caricature

of a series of art and political movements

(plural) that started with the Beats, partly fueled and fused by LSD. Acid evangelists included Timothy Leary's League for Spiritual Discovery and Ken Kesey's Merry Pranksters. There were also the Diggers

, the Anonymous of the 1960s, who sought a realistic path to a totally free economynote The familiar slogan "Do your own thing" originated with the Diggers: their other less-well-known slogan was "Everything is free." If you gave money to a Digger, he or she was liable to give it away or set it on fire., the Artists Liberation Front

, and the San Francisco Mime Troupe

about how these groups interacted and formed a new society. Word got out, attracting youthful runaways and seekers who flocked in the thousands to San Francisco's Haight-Ashbury district

and to New York's Lower East Side

during the "Summer of Love". These seeking young people were the ones most people think of as "hippies" today although the term is much older than that

, the documentary that gave most Americans their first glimpse of The Grateful Dead, the Haight had been overrun with thousands of bewildered kids, most of the men rightfully apprehensive of the draft and being sent off to die

in The Vietnam War, and looking for a better world than the artificial Stepford Suburbia.note "Another Pleasant Valley Sunday, here in status symbol land..."

The Diggers became actively involved in the peace movement

when they noticed soldiers in uniform escaping a Vietnam death sentence by obtaining civilian clothing in the Digger free stores, and began providing high quality fake IDs for them. However, The Diggers had repeatedly warned

that the increased publicity of the Be-In and the "Summer of Love" was going to attract way too many people and crash the existing Haight Street economy, let alone the Diggers. Only a few of the newcomers caught onto what was really happening and pulled themselves into a good understanding. Most had come assuming the subculture was an already-existing Free-Love Future Utopianote A certain song by Scott McKenzie — actually written as a promo for the Monterey Pop Festival — didn't help things any. instead of a work in progress

" shows that hippies were not lazy but rather changed ideas and methods of work.

Naturally, this growing mainstream attention, especially by hangers-on who came for the drugs and the sex, led to a different, more negative hippie stereotype emerging by The '70s, especially as incidents like the Altamont disaster and the Manson Family murders showed Americans a dark side to the hippie movement. These hippies, instead of free-love idealists who expanded their minds through psychoactive drugs, meditation, travel and art, were portrayed as burnouts under the sway of drug pushers, gangsters, and cult leaders who wished to exploit them both financially and sexually. Oftentimes, they were seen as susceptible to extreme leftist political ideologies as well. While there was some Truth in Television to this, many "New Left" activists of that era actually shared the disdain that the "squares" held for the hippie movement, albeit for very different reasons: they saw the hippies not as dangerous radicals shredding public morals and the fabric of society, but as politically and socially apathetic and unwilling to actually face the problems in the world as opposed to withdrawing from it into their own communes and societies. Gil Scott-Heron, in his 1970 poem "The Revolution Will Not Be Televised", famously castigated the hippies as drones engaging in a hollow rebellion who would likely try to sit on the sidelines when the real revolution came, similar to the mainstream society they rejected, and reworked the famous slogan used to define the hippie culture into "plug in, turn on, and cop out".

By The '80s, the hippie movement was mostly dead to conservative mainstream society, though it would persist in the counterculture for some time and enjoy periodic revivals, especially in The '90s when that decade's '60s nostalgia brought everything from jam bands to tie-dye shirts to Austin Powers. Most notably, key elements of hippiedom

went on to become integral parts of modern society, including what you're reading this on.

The ideals of the Haight-Ashbury counterculture heavily impacted the technology industry that arose in nearby Stanford and Silicon Valley, and with it the related hacker and computer cultures of the late 20th century, bringing to them a broadly anti-authoritarian culture, a belief in changing the world through technology, and the ideal that Information Wants to Be Free. Timothy Leary, the LSD guru who coined the hippie slogan "turn on, tune in, and drop out", even celebrated the personal computer as the new LSD late in his life, and came up with a new, Cyberpunk variation on his old saying: "turn on, boot up, jack in". Ironically, many of the original hippies scorned computers as tools of centralized controlnote the Diggers, on the other hand, saw them as a new way to create art; Richard Brautigan, who worked with the Digger-led Communication Company, wrote one of his most beautiful poems

about computers enabling humanity to create a new Arcadia, but the hackers saw them quite differently.

The earliest instances of this trope come only a few years after the first hippies, man. For a while, contemporary depictions either confused hippies with beatniks (see Shaggy from Scooby-Doo) or just portrayed them being, like, generically weird. It's like The New Rock & Roll, dude, except the hippie "messed-up" phase never ended.

Plenty of Truth in Television, here. Although a certain amount of Flanderization occurs in fiction as noted above, hippie clothing generally isn't exaggerated at all, because it doesn't need to be. As Like Is, Like, a Comma and Verbal Tic note, the use of "like" and a sentence-ending "man" are not uncommon in real life. Glossary here, if you want to dig more of the vibe, man.

Although generally considered Pacifist, the actual level varies; usually somewhere between martial and badass. If they're on the main team in an action show, they're almost always a Technical Pacifist. An Actual Pacifist is extremely rare, although they may claim this.

A subset of this character type is the Hippie Teacher, man, or like, Hippie Parents, you know? And whoah, dude: compare Granola Girl. See also Naked People Are Funny for the New Age Pants-free Retro Hippie, man. Horror Hippies are the trope's Evil Counterpart, but that's a total bummer. Hippies tend to have "out-there" names as well; see Hippie Name.

Former hippies who joined the establishment while retaining their countercultural values become a specific type, the Bourgeois Bohemian. When portrayed sympathetically, they are usually a Cool Old Guy or Cool Old Lady, while unsympathetic examples are more likely to be portrayed as Sell-Outs or Amazingly Embarrassing Parents. You may find the New Age Retro Hippie living on a Commune. Often Does Not Like Shoes, because shoes are, like, The Man for your feet, man.