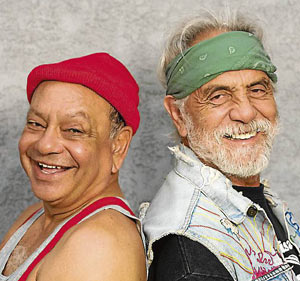 When troubled times / be-gin to bother me / I take a toke / and all my cares go up in smoke
"Dave's not here, man."
Advertisement:

An American-Canadian Comedy Duo consisting of Richard "Cheech" Marin (born July 13, 1946) and Tommy Chong (born May 24, 1938). Their comedy derives from pot smoking, hippies, the free love movement, pop culture, incompetent leaders (particularly cops) and more pot smoking. Marin, a Mexican-American, was based in Los Angeles, while Chong, the son of a Chinese truck driver and a Scots-Irish waitress, was born and lived in Canada.

Chong was originally the guitarist of the interracial R&B group Bobby Taylor & the Vancouvers (formerly "Four Niggers and a Chink"), whose hit single "Does Your Mama Know About Me", was cowritten by Chong (it was inspired by Chong's Afro-Canadian ex-wife, Maxine, the mother of Rae Dawn and Robbi).

While attempting to turn a strip joint into a comedy club (including combining strippers and comedy routines), Chong met Cheech, who came to Canada to evade the draft, and the rest was history. Born Richard Marin, the stage name "Cheech" is short for "chicharrón", or fried pork rind, which is a popular snack in Mexican cuisine.

Cheech & Chong developed a crossover audience by opening for rock bands in gigs arranged by manager Lou Adler, who got them a Warner Bros. recording contract and a string of hit comedy albums. Some of their best-known bits included "Earache My Eye" (a novelty single featuring a skit and a song by Alice Bowie), "Basketball Jones" (sung in character by Cheech as an African-American basketball player, with appearances by George Harrison, Carole King, Billy Preston, and Tom Scott), "Santa Claus and His Old Lady" (in which Cheech tells a fractured version of Santa's origins), "Sister Mary Elephant" ("Class? Class—SHUT UP!!!"), and, in particular, "Dave", in which Cheech is trying to get inside the house after a successful drug transaction, but Chong, too stoned to realize who is outside, tells him "Dave's not here!"

Their success with live shows and albums was followed by a successful film career, beginning with Up in Smoke. However, Cheech felt that if he continued playing stoner roles, he wouldn't be taken seriously as an actor, leading to the duo's breakup, following more "experimental" efforts like The Corsican Brothers, which didn't feature any drug humor at all, and the video and album Get Out Of My Room, which focused primarily on comedy music (and, again, featured very little pot smoking).

Cheech had the most success as a solo actor, appearing in the series Nash Bridges, lending voice acting to Disney movies like The Lion King and Cars, and small roles in Robert Rodriguez movies like From Dusk Till Dawn (delivering a hilarious "pussy" speech trying to hustle people into the Tittie Twister bar), Spy Kids and Machete, and pretty much moving a big step away from his former stoner image. Chong, however, retained firmly in the stoner culture, and his film and TV roles were pretty limited, with his biggest solo success being his role in the series That '70s Show.

Attempts at a reunion were largely unsuccessful because the two comedians were unable to get along with each other for a very long time, and appearances together in Ferngully and South Park were done with their voices recorded separately. (Chong was also offered a part in The Lion King, but turned it down, and as a result, the character was changed into a female and the part was given to Whoopi Goldberg). Meanwhile, Chong and his wife, Shelby, toured as a team, and their routine included updated versions of Cheech and Chong bits.

Plans by Cheech and Chong to finally unite were halted when Chong was targeted by two American investigations code-named Operation Pipe Dreams and Operation Headhunter, which sought out businesses selling drug paraphernalia, mostly bongs, and was arrested and imprisoned for his son's "Chong Glass" company, which sold water pipes with Chong's likeness. These events were chronicled in the documentary a/k/a Tommy Chong. After Chong's release plans to reunite resumed, but the two still had trouble getting along with each other, and cancelled reunion plans.

Finally, in 2008, it was announced that the duo had resolved their issues with each other, and would officially reunite, and completed two tours in which they performed classic routines, updated routines, and new material. Shelby Chong performed standup as the duo's opening act. Cheech and Chong lent guest voices to an episode, A Midsummer's Nice Dream of The Simpsons and plan to make a sequel to Up in Smoke. In 2011, they did the voices of two of The Three Little Pigs in Hoodwinked! Too: Hood versus Evil. They often stay active in solo projects as well - in 2019, Tommy was on The Masked Singer.