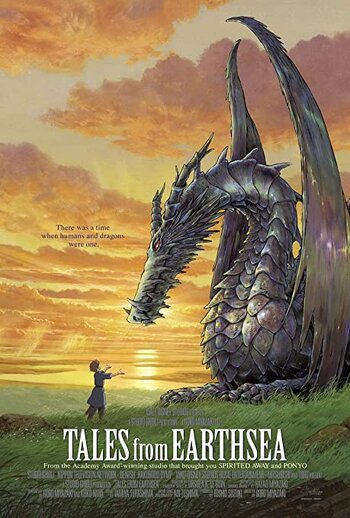 Don't let this fool you. The movie is NOT about dragons.
Advertisement:

Tales from Earthsea (Gedo senki, "Ged's War Chronicles") is a Studio Ghibli animated film based on the first, third, and fourth novels in the Earthsea series by Ursula K. Le Guin. The film was directed by Goro Miyazaki, the son of studio founder Hayao Miyazaki. The soundtrack was done by Tamiya Terashima who previously worked on Tweeny Witches.

While this film is covered under the Disney/Ghibli distribution deal, licensing issues with the SciFi Channel miniseries had prevented it from being released in North America. It finally hit US shores in August of 2010, with the dub cast featuring the likes of Willem Dafoe, Timothy Dalton, and Mariska Hargitay.

Tales from Earthsea provides examples of: