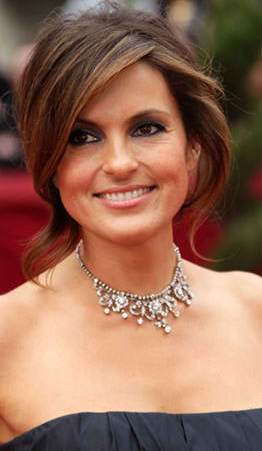 Jim Hagerty: Mariska! Mariska Hargitay!
Tracy Gill: She walked away with the award for “Best Physical Intimidation of Man who Could Clearly Crush Her in Real Life.”
Jim: She proves that just because you’re a beautiful woman, you don’t have to be weak on television.
— “Strong Women in Television Awards”

Mariska Magdolna Hargitay (born January 23, 1964 in Santa Monica, California) is an American actor, best known for her role as New York City sex crimes Detective Olivia Benson on the NBC television drama Law & Order: Special Victims Unit, a role that has earned her multiple awards and nominations, including an Emmy and Golden Globe.

She is also the daughter of actor Jayne Mansfield and actor/bodybuilder Mickey Hargitay (who was Mansfield's second husband and the most well-known out of the three). The three-year-old Mariska was asleep in the back seat during her mother's fatal car crash, and was left with a scar on her face. She's since been adamant that she does not want to ever talk about it or her mother's legacy. It was only until she got married with three kids that she understood what it was like to be an actor and a parent, according to her in recent interviews.

She is married to actor Peter Hermann and they have three children.