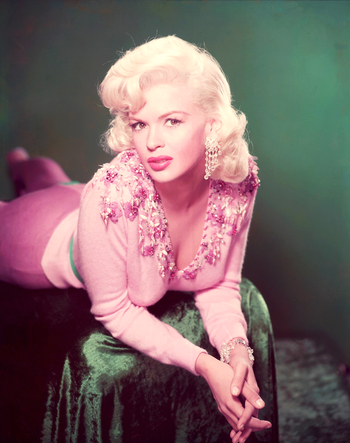 "If you're going to do something wrong, do it big, because the punishment is the same either way."
Advertisement:

Jayne Mansfield (born Vera Jayne Palmer; April 19, 1933 – June 29, 1967) was an American actress, and as the second most famous of the "Blonde Bombshells" of The '50s, paralleled Marilyn Monroe in many ways.

Her legacy isn't so famous as that of Marilyn, but she is an important part of film history. She was also the mother of Mariska Hargitay, who at 3 years old was asleep in the back seat along with her siblings during the fatal car crash, and was left with a scar on her face.

She was an avid wearer of pink, perhaps even solidifying Pink Means Feminine. Her pink paraphernalia ranged from her dresses to accessories, to cars, to her whole mansion

The Siouxsie and the Banshees song "Kiss Them for Me" is inspired by Mansfield. It was named after a movie co-starring Cary Grant that Mansfield hoped would legitimize her as an actress. (That's not how it went down.)