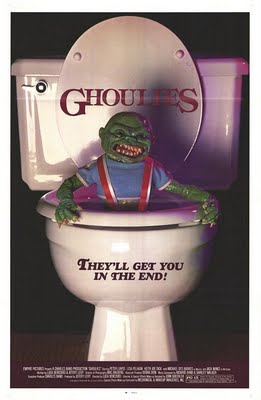 Worry not, troper, nobody is going to get your end.
Advertisement:

Ghoulies (1984) and its sequels form a franchise of B-Movie horror comedies about the eponymous familiars that cause mischief.

In this first film, one Jonathan Graves moves into an old family mansion together with his girlfriend. In there, he starts dabbling in the occult like his late father, summoning the Ghoulies, two dwarf servants and his dead father as well.

Rest of the movies in the series:

Not to be confused with Grabbed by the Ghoulies, a video game developed by Rare.