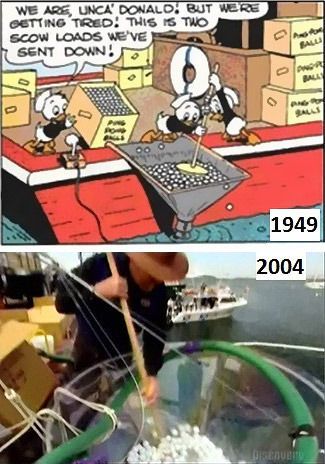 Can you raise a sunken boat with nothing but ping-pong balls? Yes, actually.note Why haven't they tried this with the Titanic yet?
"As far as I know, the first suggestion in the scientific literature about terraforming the planets was made in a 1961 article I wrote about Venus. [...] The idea was soon taken up by a number of science fiction authors in the continuing dance between science and science fiction - in which the science stimulates the fiction, and the fiction stimulates a new generation of scientists, a process benefiting both genres."
— Carl Sagan, Pale Blue Dot

Leonardo da Vinci didn't invent the helicopter, but he did pioneer a concept for one.

Throw enough hypothetical inventions and scenarios out into the world and the chances are that some of them will eventually become reality. Some were ideas waiting to happen: even our stone age ancestors could see from birds that flying was possible. Some ideas required a bit more imagination. Either way, life has imitated art.

A Super-Trope to Defictionalization, which is deliberately doing this as part of merchandising. Compare The Red Stapler, which is when art affects the popularity of something. Contrast Truth in Television.

If the art's creator genuinely had no clue what they were talking about, but was proven correct regardless, see Accidentally Correct Writing. If the idea was portrayed in the original work as an absurd impossibility, see Not So Crazy Anymore.

Not to be confused with Art Initiates Life, which describes artistic pieces literally coming to life.