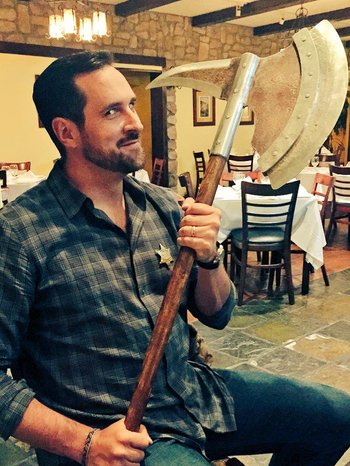 When I become Roy Mustang, there will be changes. On that day, all female cast members will be required to wear...TINY MINISKIRTS!
If authority needs to kick some ass, it needs a proper charismatic voice to do so.
Advertisement:

Travis Hampton Willingham (born August 3, 1981) is an American voice actor born in Dallas, Texas. He originally starting out as Col. Roy Mustang in the 2003 anime adaptation of Fullmetal Alchemist. After that, he started getting pigeonholed into voicing characters that are either badasses or have a high rank or status, be it military or some other thing (not to mention a few characters Playing with Fire). He is somewhat memetically popular thanks to his infamous "tiny miniskirts" decree and the fact that "HE LOVES DOGS!" (and he actually does like cute things — not hard to believe considering his role as Mori-senpai). Like Vic Mignogna and Aaron Dismuke's Risembool Rangers, his loyal Miniskirt Army follows him from con to con. He is among the few voice actors to also get many live-action roles.

In 2005, he become famous for his non-anime activities when he took on Monica Rial in a tequila shot contest after Anime Weekend Atlanta. Needless to say, the result was hilarious and has come to be known as The Travis Willingham Tequila Story. Multiple versions were told; one each by Vic Mignogna

, and of course, Travis himself

He has been doing dubbing for many California-based works, as have many other Funimation voice actors such as Troy Baker and Laura Bailey. And now, he's even living there. He's married to Laura Bailey as of 2011, and thus he's now officially a family man. Even more officially when on March 1 2018, Bailey sent out a Tweet revealing that she is pregnant with their first child, a son named Ronin who was born on June 28, 2018.

Due to becoming a union actor, Willingham primarily does video game voice overs and western animation nowadays, rarely getting any new anime roles, generally only reprising roles when he does anime. If he does get a new anime role, it's usually with Studiopolis.

''TV Tropes Will Ruin Your Life , so go home and be a family man.

Example of:
Put on a Bus